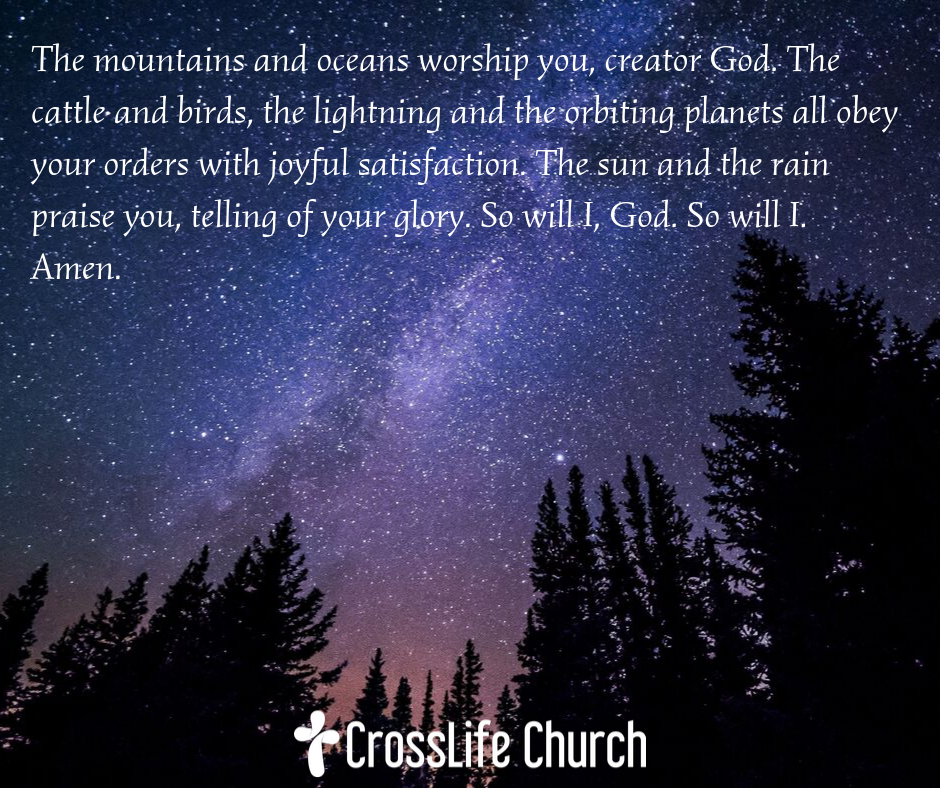 Before the creation of all that exists, God the Father, God the Son, and God the Holy Spirit exist as the triune God. Now, why is that such a big deal? Because it makes God supreme.

The only true God is before and above all things created, all animals, all mountains and waves and winds, all planets and the sun and moon and seasons—and humanity. These are all created by God, they didn’t exist before.

So the Bible tells us that all creation rightly submits to God, praises him, and loves obeying his commands. He was here first. He brought them all into being. Like a roll call for God’s created beings to show up and praise him, Psalm 148:7-12 says, “Praise the Lord from the earth, you great sea creatures and all ocean depths, lightning and hail, snow and clouds, stormy winds that do his bidding, you mountains and all hills, fruit trees and all cedars, wild animals and all cattle, small creatures and flying birds, kings of the earth and all nations, you princes and all rulers on earth, young men and women, old men and children.”

Who is being praised by all these magnificent created beings? The uncreated Lord God. Who is among these created beings praising the Lord God as supreme? Kings. Rulers. Men. Women. Children. You. Me. Verse 13 continues, “Let them praise the name of the Lord, for his name alone is exalted; his splendor is above the earth and the heavens.”

Whose name is exalted by creation? The Lord. Is anybody else’s name praised as the creator God? No. “His name alone.”

Is your name in the Bible right there, saying that creation bows down to you? No. Do you have the right to tell God what to do with his world? No. Do you have supreme wisdom or skill or might over God that allows you to tell God how he created the world? No. Does he have the right to tell you how he created the world? Yes. Don’t try to rob God of that right.

You are not God’s creator, designer or teacher. But he is yours. That’s okay with the animals, the mountains and waves and winds, all planets and the sun and moon and seasons. Is that okay with you?

PRAYER: The mountains and oceans worship you, creator God. The cattle and birds, the lightning and the orbiting planets all obey your orders with joyful satisfaction. The sun and the rain praise you, telling of your glory. So will I, God. So will I. Amen.

FURTHER MEDITATION: Explore this excellent song called “So Will I,” by Hillsong United https://youtu.be/C2U7ffUM5Ec. Meditate on the love and power of God, the surrender and grandeur of his character, and your response.

Some of the lyrics: