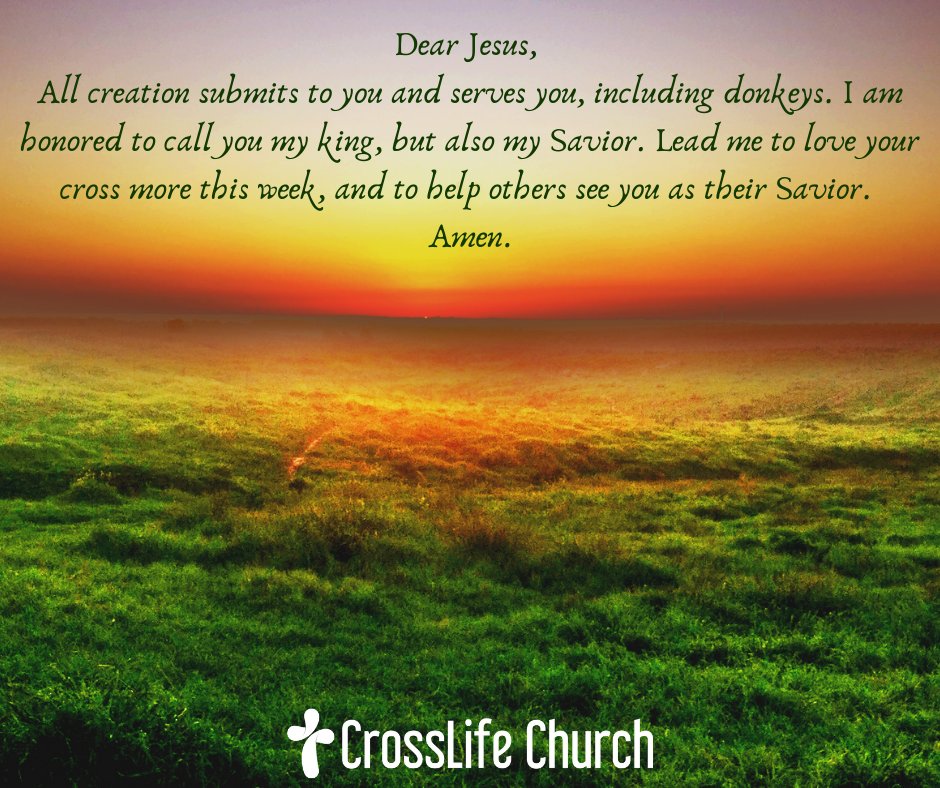 It’s just a legend, combining biblical truth with fairy tale. As legends tend to do, it makes us think, helps us remember, and gives us something to share with others.

Here’s how it goes: there was a poor farmer during Jesus’ time who owned a donkey, but it couldn’t do the work that the other donkeys could do, and he couldn’t afford to keep it.

So he tied up the donkey by the road, hoping that someone would take it. Jesus’ disciples came by, and that’s what they did. They took it, just as Jesus had instructed, and brought it to him.

Jesus rode the donkey into Jerusalem, resembling a king riding to his people. Except this king, Jesus, was also the sacrifice who would soon suffer the punishment of death for the sins of the world.

According to the legend, after Jesus finished riding the donkey, it followed him. All the way to the cross, where it grieved as he suffered and died. The donkey turned away, but wouldn’t leave.

It was then that the shadow of the cross fell upon the donkey’s back, and there it stayed. That is why, the legend says, all donkeys now have a mark on the top of their back that resembles a cross.

Less of a legend, but instead the divine truth, the Bible declares to all those in Jerusalem and all of us who follow Jesus, “‘See, your king comes to you, gentle and riding on a donkey, and on a colt, the foal of a donkey’” (Matthew 21:5).

PRAYER: Dear Jesus, all creation submits to you and serves you, including donkeys. I am honored to call you my king, but also my Savior. Lead me to love your cross more this week, and to help others see you as their Savior. Amen.

FURTHER MEDITATION: Read Matthew 21:1-11. The donkey (and her colt, mentioned by some of the gospel writers but not all) provide a service to Jesus. They not only fulfill the prophecy, but allow him to ride through a crowd so that he is a bit higher than the heads and shoulders of all the people. They can see him. Praise him. Follow him. What objects or creatures is Jesus using this week to help you see him? What circumstances are pointing you to his saving work?