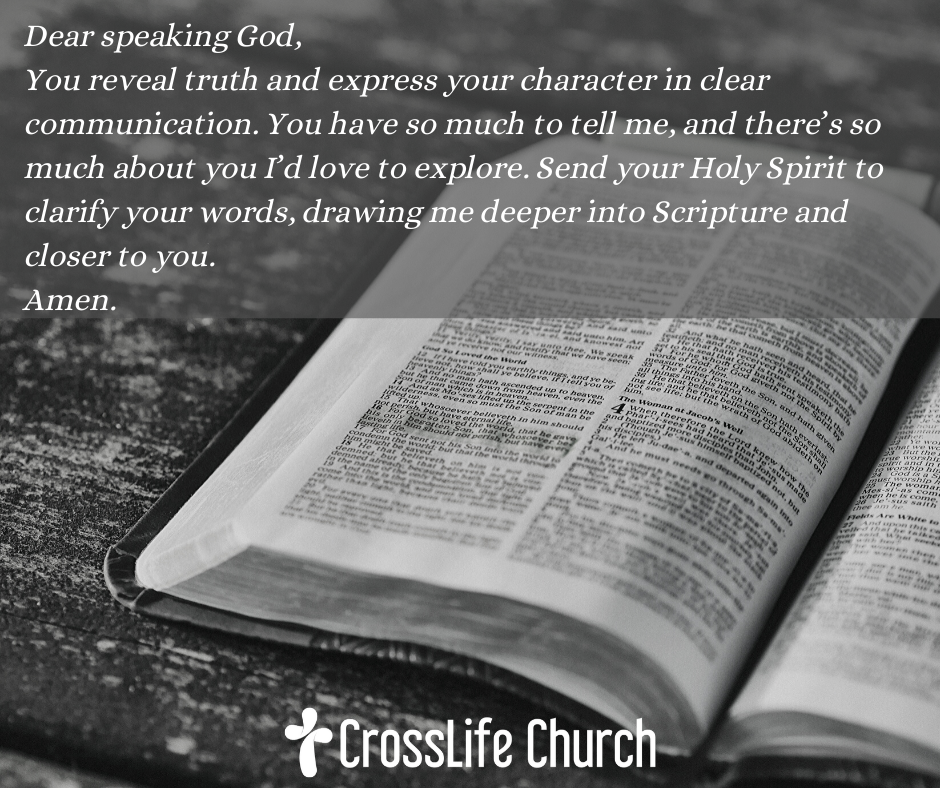 The Bible book of Hebrews is originally a letter written to a group of Jewish Christians ready to give up on Jesus because of dangers and difficulties in their lives.

Unlike other Bible books originally written as letters (sometimes called “epistles”) the author does not begin with the typical greeting that names him, offers words of introduction, and perhaps identifies his audience.

He just launches into a majestic blast of divine dogma and doesn’t breathe a personal note until the first verse of chapter two! What’s so important that it would make a Bible writer break from the accepted style of communication?

God has something we wants to tell you. It’s really important!

“God spoke,” verse one announces. Our God is a speaking God. He communicates, expresses himself, and opens up to anyone who will listen, better than mute idols with unmovable lips fashioned by hopeful human hands; better than the gods of other religions programmed to say what their makers want them to say like a doll with a pull string.

Our God has something of his own to say, he is able to communicate it, and he wants expresses it in this twofold data plan.

“In the past God spoke to our ancestors through the prophets at many times and in various ways” (Hebrews 1:1). In biblical history, God used spokespersons. Prophets. He communicated to people not directly, but through these men. Yes, they foretold the future some times, but more often they forth-told the commands and promises of God.

We have some of their communication still today, assembled as books of the Bible. God’s own words, proclaimed and penned by his chosen agents.

We call this “verbal inspiration,” a method that God used to communicate to the world by using men of the world to speak and write his message exactly as he gave it to them or guided them to share it. Because of this, we place our confidence in the accuracy of the Old and New Testaments alike. It is God’s Word, not man’s word, free from any error and absolutely true.

Now, as perfect as the Bible is, and as exalted as the prophets are, the Bible and its authors are not the limit for God. God ultimately expresses himself to us in his Son Jesus Christ!

The prophets spoke for God. The Son speaks as God. “In these last days he has spoken to us by his Son” (Hebrews 1:2). God completely expresses himself, reveals himself, and communicates his character in the person of his own Son. Want to know God? Discover more about Jesus.

God has so much to tell you!

PRAYER: Dear speaking God, you reveal truth and express your character in clear communication. You have so much to tell me, and there’s so much about you I’d love to explore. Send your Holy Spirit to clarify your words, drawing me deeper into Scripture and closer to you. Amen.

FURTHER MEDITATION: Start reading Psalm 119 at verse 1. It offers a spectacular promotion about the benefits of listening to God, studying his Word, and applying it. Note over 7 different synonyms for “God’s Word” though the psalm—like statues, precepts, decrees, laws, etc. All of them mean that God has so much to say. Now, as you start reading, list the benefits it mentions. The blessings of communicating with God by listening to his Word. There are many! Just keep making a list until you’re satisfied—there is plenty of material.