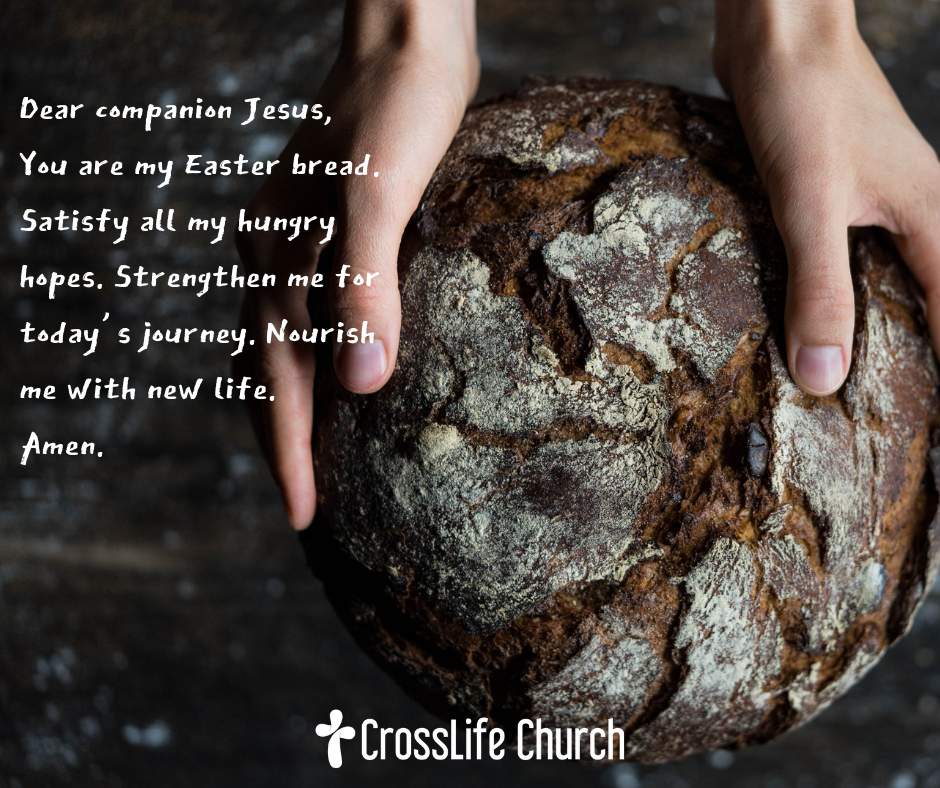 Panera Bread takes its name from the Latin “panis,” meaning “bread,” and the word “era,” for time. A significant part of the company’s mission is the companionship customers can enjoy, reflected in one of their slogans, “fresh bread makes friends.”

When [Jesus] was at the table with them, he took bread, gave thanks, broke it and began to give it to them. Then their eyes were opened and they recognized him, and he disappeared from their sight. They asked each other, “Were not our hearts burning within us while he talked with us on the road and opened the Scriptures to us” (Luke 24:30-32)?

This isn’t Panera Bread. This is Jesus finally being recognized by two of his followers who were walking home to Emmaus, a village outside Jerusalem. They knew Jesus had died, but didn’t know he had risen. So he appeared and walked with them, then broke bread with them.

The two now recognize this companion, this “bread bringer wither,” as Jesus their risen Savior!

Our hungry hopes find their satisfaction, too, not in seeing Jesus but in believing that the words and works of Jesus all culminate in his resurrection from the dead. This is our Easter bread!

Easter bread first baked for three days in the stone oven of a tomb that rises afterwards, now multiplied enough to feed thousands and billions of starving souls for days and years and eternities to come.

Easter bread kneaded and worked by the hands of a Creator who has in mind not just bringing people into existence but shaping our lives in this world.

Easter bread that sustains and strengthens us for our ultimate destiny in heaven.

Easter bread sometimes distributed in small crumbs that fall from the Master’s table with a wink in his eye so that sinful beggars can have a taste of his grace.

PRAYER: Dear companion Jesus, you are my Easter bread. Satisfy all my hungry hopes. Strengthen me for today’s journey. Nourish me with new life. Amen.

FURTHER MEDITATION: Find a quiet, undistracted place. Give God your full attention. He has things to say that you need to hear today. Put away all your devices and deadlines, and just listen. Read Luke 24:13-35. What changed these men from being “slow of heart” to having “burning hearts?” Ask yourself this question, and pray about it, “How can my heart be transformed from slow to burning?”