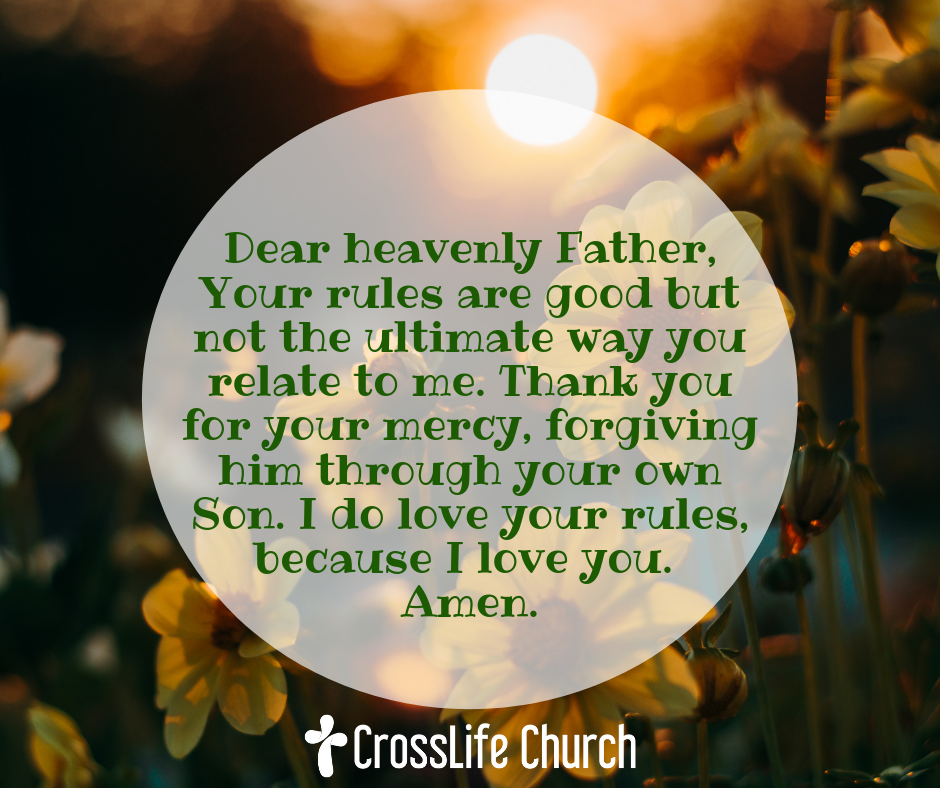 I’m a rule keeper. A rule follower. A rule giver. That’s a confession not a boast.

On Father’s Day I reflected on the many rules I laid down for my sons. Pick up your shoes. Get out of bed for school. Say your prayers. Listen to your mom. Get good grades. Make 80% of your free throws. Flush the toilet. Keep it quiet while I’m napping. Mow the lawn. Keep it quiet while you’re mowing the lawn.

The rules themselves weren’t always bad or wrong. But what did my sons grow to believe about my expectations related to the rules: keep them and I approve and accept you? Yup.

Of course, the alternative is not so good. Don’t keep them and I don’t approve and accept you. Ah, parenting is a difficult thing when it comes to laying down the rules.

Because kids need them. Families need them. But they must not be the master. Rules must be the servant. Rules must be administered in a spirit of forgiving grace. Ask grandparents what that looks like, and listen to their years of wisdom.

That’s why I enjoy Jesus’ parable of the lost sons (Luke 15:11-32) whose loving father broke the rules. The father didn’t lecture his returning, rebellious son, “I told you so!” The father didn’t accept that son’s proposal to become a hired servant, nor did he accept the older son’s assumptions that he was perfect enough in his obedience to the rules. Instead, the father exclaimed to both: “My son!” (Luke 15:31).

The father broke the rules of legalism (rules are master not servant) that often force themselves into relationships. He ran down the road somewhat wildly, hiking up his robe a bit too high to be respectable, because he had to welcome his son. He threw a feast, shouted with joy, and made spectacular promises to both his boys—neither of whom kept his rules perfectly.

God the Father forgives me and promises I can be a gracious father, too.

PRAYER: Dear heavenly Father, your rules are good but not the ultimate way you relate to me. Thank you for your mercy, forgiving him through your own Son. I do love your rules, because I love you. Amen.

FURTHER MEDITATION: Read Jesus’ parable of the lost sons in Luke 15:11-32. Notice how the father “broke the rules” from his initial response to his younger son, to receiving him back, and then also his response to his older son. What rules are keeping you from loving someone else they way that they need? How can the rules become better servants instead of masters?