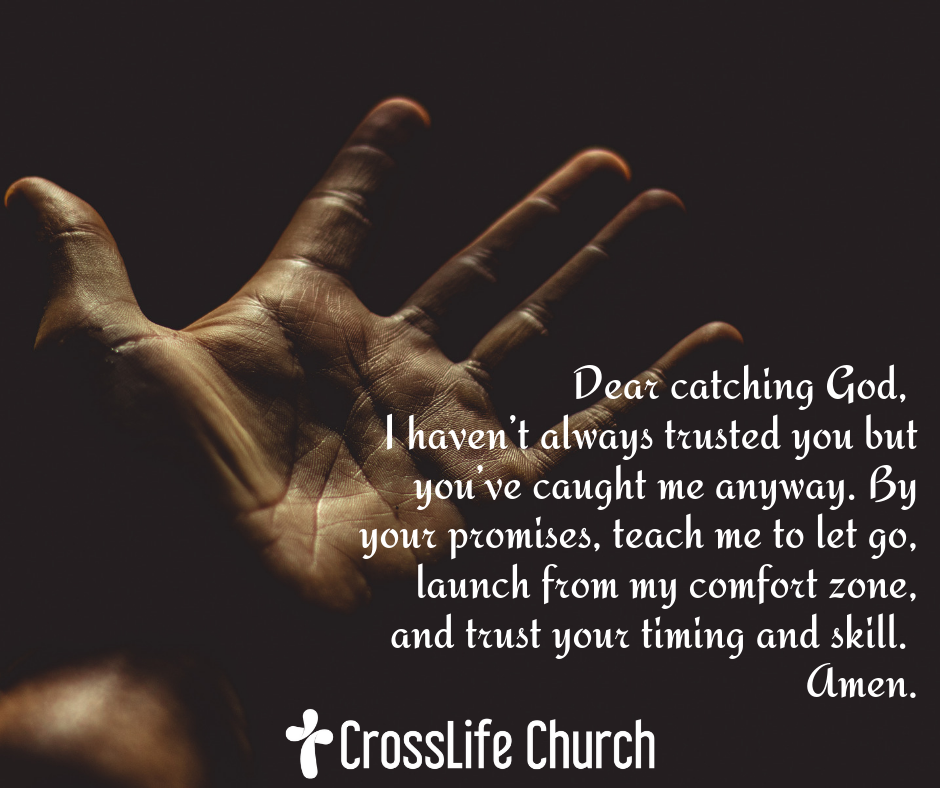 Circus performers will tell you that there is a very special relationship between the trapeze artists.

One of them releases from their trapeze, leaving it behind. They twist and turn up into the air and at the peak of their arc, when they aren’t launching up into the sky any longer, they must stop, and remain as still as possible (that one is called “the flier”).

Their partner is swinging on a trapeze from their knees. At just the right moment they swoop in like an eagle and grab the flier with precision timing and strength (that one is called “the catcher”).

It takes years to train for this, with one of the most important rules being that the flier must never try to catch the catcher, but must wait in absolute trust. Even in that split second when they think they’re plummeting to their death.

God asked Abraham to release, to leave things behind. “Go from your country, your people and your father’s household to the land I will show you” (Genesis 12:1).He’d have nothing to hold onto any more. But what he had been holding onto wasn’t enough. Not for God’s big plans and promises.

God has big plans and promises for you, too.

Often times, however, our heads, hands and hearts are already full of stuff. Stuff we think is important. But it’s just not as important as God’s blessings.

The biggest of all blessings God had lined up for Abraham was a miracle son. Even in his old age, with a wife who couldn’t bear children, Abraham would have a son.

Everything else came true for him through the gift of his son. Descendants as numerous as the stars. A great name and nation. Everyone on earth being blessed through a special descendant many generations later.

Jesus was that special descendant. Another miracle Son, born to a virgin. Through him, everything else comes true for you.

So let go. Fly into the air and freeze. You won’t fall. He’ll catch you. And love you. And bless you bigger than you can imagine.

PRAYER:Dear catching God, I haven’t always trusted you but you’ve caught me anyway. By your promises, teach me to let go, launch from my comfort zone, and trust your timing and skill. Amen.

FURTHER MEDITATION:Meditate on Genesis 12:1-3. God starts (v. 1) by telling Abram what he’d be leaving behind. Not a savvy way to make a sale. But the contrast comes next (vv. 2,3). God’s way is so much better! Can you identify a blessing of God you’ve been praying for, and consider the possibility that God is waiting for you to let something go before he gives it to you? Pray to him about that.