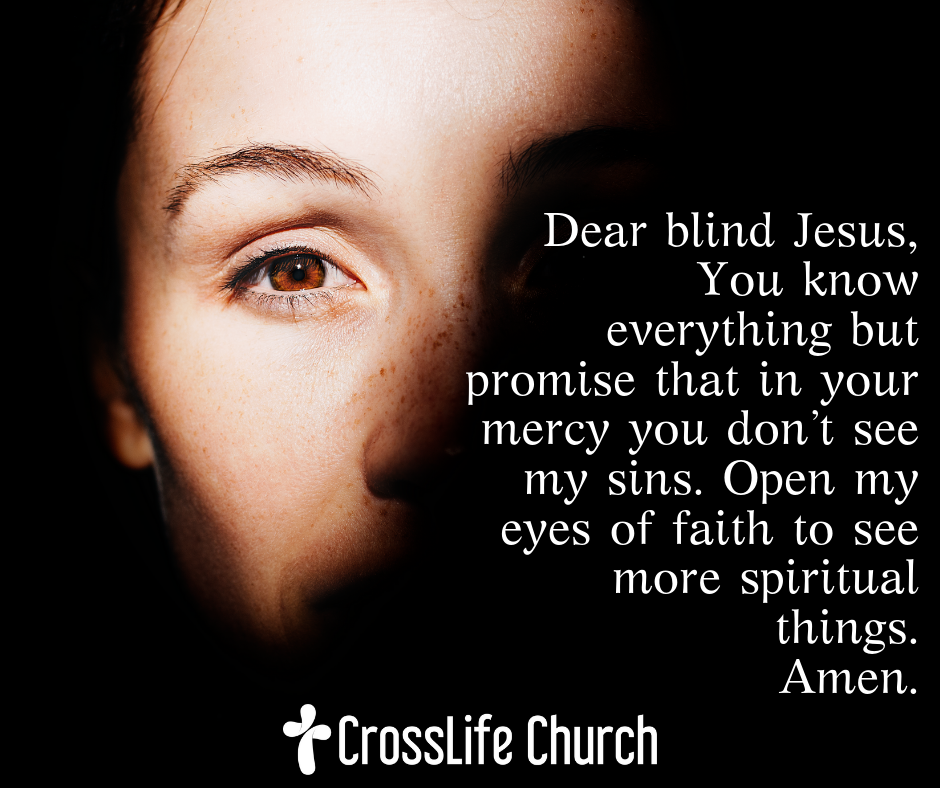 Jesus once said, “For judgment I have come into this world, so that the blind will see and those who see will become blind” (John 9:39).

Jesus has the right and will exercise that right to judge all people. He won’t judge you on whether you’re blind or not, but whether you are aware of it. Whether you seek help. That’s what he means by “those who see will become blind.”

People who don’t see their need for a Savior, won’t have a Savior. They won’t see heaven or God’s help or divine blessings. Ever.

But those who confess their sins, who repent, who admit they are often confused, that their faith doubts in times of weakness, that they don’t always get it right or know everything. Jesus will heal them, and they will truly see. They will see their Savior, a heavenly future, and divine blessings even now.

To make that possible, Jesus himself became blind. The night before he was crucified, Jesus was arrested by temple guards for teaching that he is the Son of God and Savior of the world. The guards “began to spit at him; they blindfolded him, struck him with their fists, and said, ‘Prophesy! Who hit you?’ [They] took him and beat him” (Mark 14:65; Luke 22:64).

Jesus was blinded. He couldn’t see the sinners smashing his face. Not because of the blindfold (Jesus can see through anything) but because he closed his eyes.

He didn’t see the bloodthirsty soldiers. He turned the other cheek of mercy and forgiveness. He wouldn’t prophesy who hit him. He would not retaliate with his own destroying curses against the human blindness of unbelief.

Instead Jesus became the curse for spiritual blindness. He suffered the sentence on the world’s sins. He was judged by his own justice, but also by his own love.

So that you are not spiritually blind. So that you see him as your Savior. So that your sins are forgiven and your eyes are opened to mercy.

PRAYER:Dear blind Jesus, you know everything but promise that in your mercy you don’t see my sins. Open my eyes of faith to see more spiritual things. Amen.

FURTHER MEDITATION:Read 1 John 1:1-2:11. As you spend time in this longer section of Scripture, pause and meditate on the portions that describe blindness (darkness) and seeing (light). What blessings are promised for living in the light?