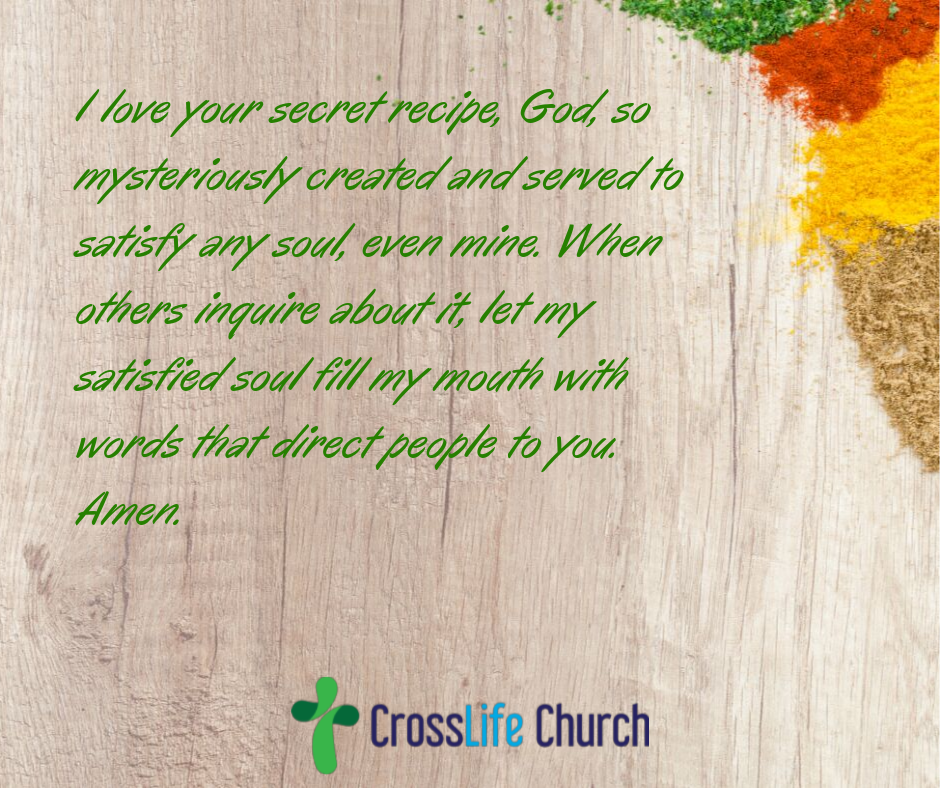 Christina has a secret recipe for the best Buffalo chicken wings you’ll ever taste in your life. Everybody who tries these wings just raves about them.

She brought them once to her women’s group and all the ladies couldn’t stop talking about them. They begged for her secret recipe and she posted it on their group page. Now, anytime any one of those ladies brings a dish to a social gathering, it’s Christina’s crowd-pleasing wings, and other people ask for the secret recipe, and Christian’s friends pass it on and say, “My friend Christina made these.” And then next person passes on the secret recipe, and the next and next …

The apostle Paul talks about a secret recipe of God and says something like this: “Have you tried to whip up a batch of God’s loving promises, forgiveness and peace? It’s a secret recipe given to me that I’m now giving to you.”

That’s my paraphrase of Ephesians 3:2,3. “Surely you have heard about the administration of God’s grace that was given to me for you, that is, the mystery made known to me by revelation, as I have already written briefly.”

Grace—This is all of the secret ingredients God puts into his recipe, the blessings he gives undeserving sinners, especially spiritual blessings like forgiveness, mercy, peace and joy. We don’t buy these ingredients, we don’t plant them, slice or sauté them. They’re a gift. “Given to me,”Paul says.

Administration—The secret strategy explaining how to use the ingredients, and who gets to enjoy them. The wider context of Ephesians chapter 3 explains clearly: God’s grace is for anyone. Not just for people like you. God’s kingdom is bigger than we think.

Mystery—That’s the secret recipe itself. Something nobody would know on their own, but when they try it, they love it. God’s plan of grace and salvation isn’t naturally obvious or understandable. When received by faith, it changes your life.

Revelation—God’s secret communication plan is that believers who love his secret recipe will enjoy it, live it, and talk about it so that others say, “Can I have that recipe?” It’s something that needs more than modeling or letting your light shine. Sharing a recipe is more than showing someone a picture or watching them taste something scrumptious. The recipe must be revealed, written or spoken. Christians shouldn’t just walk the talk, but also talk the walk.

PRAYER: I love your secret recipe, God, so mysteriously created and served to satisfy any soul, even mine. When others inquire about it, let my satisfied soul fill my mouth with words that direct people to you. Amen.

FURTHER MEDITATION: Read Ephesians 3:1-13. Take your time, this is some deep Scripture that weaves in and out through Paul’s writing. Pay attention to the 4 key words: grace, administration, mercy and revelation and their meaning. For Paul and the Jewish Christians, it was the Gentiles who needed their welcoming love and invitation. Who is it in your life, or your church’s community, who needs that from you? from your church? Pray about it.