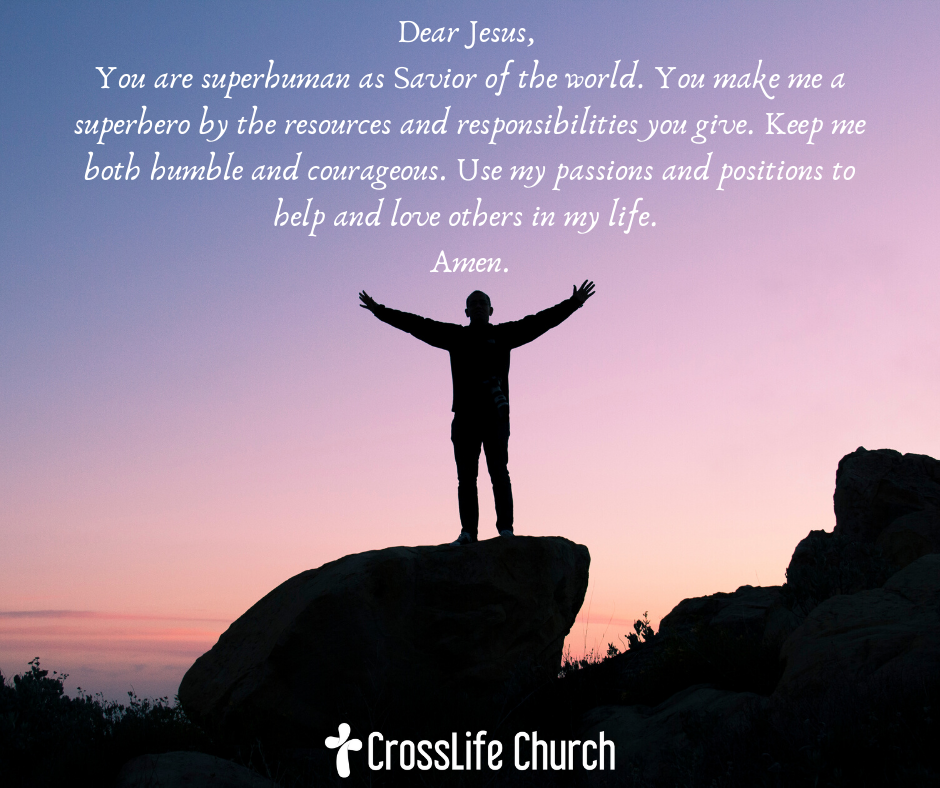 The History Channel once aired a series taking viewers deeper into the bat cave to discover whether Batman is an ordinary person like the rest of us, or if he’s superhuman.

In one of the episodes, called “Batman Tech,” they demonstrate the incredible array of bat gadgets at Batman’s disposal (if you or I drove the batmobile we could take hairpin turns at 100 mph too).

Use your gifts for others

So you really don’t have to be a superhuman to be a superhero. As long as you’re willing to use your gifts, gadgets, resources, and opportunities to help others.

The Bible unfolds the story of Joseph in the book of Genesis. In his younger days Joseph was given his share of gifts, including a beautifully designed coat. Instead of wearing the coat humbly and responsibly, however, Joseph abused it and showed off in front of his brothers.

Joseph was given a job by his father, Jacob, to report to him about the needs of his brothers working in the fields. But Joseph exploited this, spying on his brothers and bringing reports to his father that made them look more badly behaved than they really were.

God gave young Joseph vivid dreams, but Joseph interpreted them with selfish pride about his future and uncaring superiority declared over his older brothers.

They almost killed him, but came to their senses and sold him off to slave traders instead. God, in his mercy, continued to bless Joseph and, enduring through his trials and hardships, Joseph matured to become a blessing to others. God fulfilled Joseph’s dreams and gave him a high position in the Egyptian government.

As governor of Egypt, Joseph administered a system of storage during seven years of bounty that saved Egypt and even the surrounding nations during the seven years of famine that followed. Among the people saved from starvation were not only the Egyptians, but also Joseph’s father and brothers—and nephew Perez whose descendant, born 1900 years later, was named Jesus.

Use your gifts from Jesus

And there’s more than a family connection between Joseph and Jesus. “Joseph was thirty years old when he entered the service of Pharaoh” (Genesis 41:46). Jesus was thirty years old when he began his public ministry. “Pharaoh gave Joseph the name Zaphenath-Paneah (‘sustainer of life’)” (Genesis 41:45). Jesus is the life-giving Savior. Both were rejected by their brothers, both were countered by false religion and betrayed by those they trusted, both sold for silver and unjustly condemned, both suffering in a strange land for the good of those who betrayed them, both willing to forgive, using their gifts for believers and unbelievers alike, both exalted to positions of power.

God made Joseph like Jesus, and makes you like Jesus according to this Bible passage, “If anyone serves, they should do it with the strength God provides, so that in all things God may be praised through Jesus Christ. To him be the glory” (1 Peter 4:11).

What has God given you?

Maybe not superhuman powers or a prestigious position at the top like Joseph, then again the point is not how much Joseph received but how he used it for God’s glory.

What has Jesus given you?

A special ability to plan and organize, a steady salary, a passion for engineering? Like Joseph and Jesus, use your gifts. Still searching for what makes you special, filing for unemployment, or living in the shadow of someone others see as more talented? Like Joseph and Jesus, don’t let your circumstances change your true identity.

The resources and responsibilities that make each of us who we are may not mean a whole lot to us. But Jesus says, “They mean something to me.”

That makes you a superhero.

Dear Jesus, you are superhuman as Savior of the world. You make me a superhero by the resources and responsibilities you give. Keep me both humble and courageous. Use my passions and positions to help and love others in my life. Amen.

Read Genesis chapter 41 for the entire story here. Note how God blessed Joseph. How has God blessed you? How are you using these gifts?