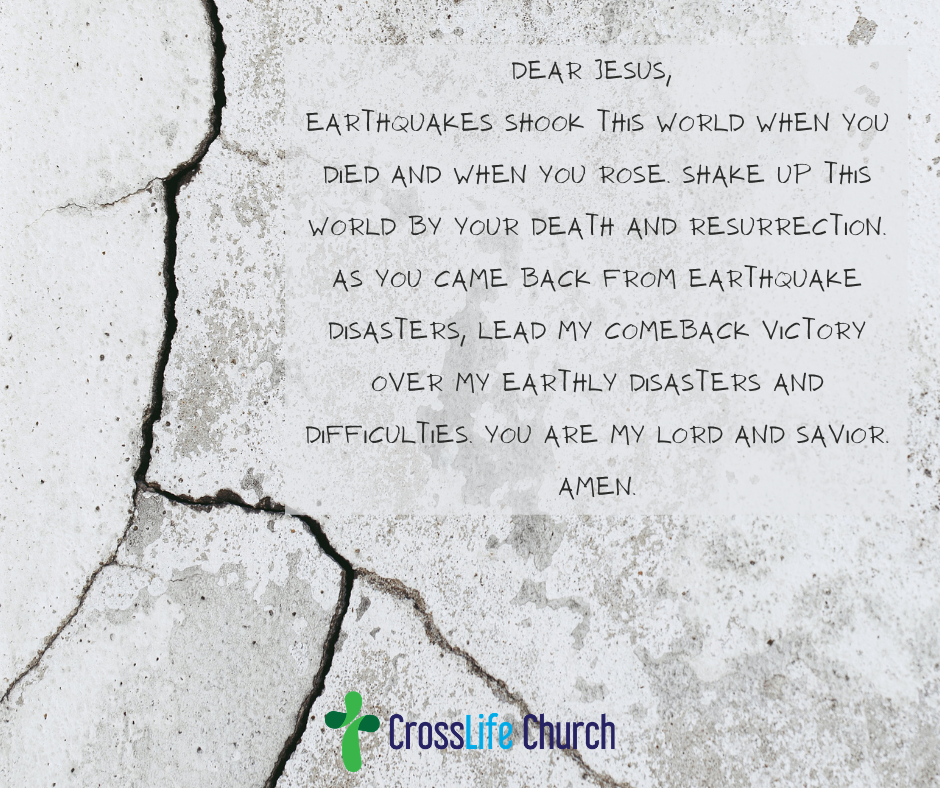 Earthquakes are natural disasters. Some of the worst earthquakes in our world’s history have killed 200,000-300,000 in each incident.

The Bible says there was an earthquake when Jesus died, and then another earthquake when he rose to life. Let’s go to the scene at the above-ground tomb of Jesus that was sealed by a big, stone rolled in front of the opening.

“There was a violent earthquake, for an angel of the Lord came down from heaven and, going to the tomb, rolled back the stone and sat on it. His appearance was like lightning, and his clothes were white as snow” (Matthew 28:2,3).

Something is very wrong when the earth quakes, because the earth is solid ground. It’s not supposed to move. The earth is also designed by God to decompose dead bodies into worm food.

So the earth’s job is to hold us up when we’re alive, and hold us in when we’re dead. But it was forced to do the opposite to Jesus.

Romans soldiers sunk the bottom of the cross into the earth and crucified Jesus on it, so the earth was holding Jesus up when he was dead. It convulsed and shook at this disaster. The holy, innocent Son of God died!

Then, Jesus was buried on Friday and inside his tomb he came to life on Sunday. At that moment the earth was holding Jesus in when was alive. It convulsed and shook at this disaster. The living, victorious Son of God buried alive!

So God sends his angel to roll the stone away, open the tomb, and shine his holy brightness into the cave to reveal that Jesus rose from the dead.

“We were therefore buried with him through baptism into death in order that, just as Christ was raised from the dead through the glory of the Father, we too may live a new life” (Romans 6:4).

Connected to the death, burial and resurrection of Jesus in baptism, you come back from disaster and live a new life of victory in Jesus Christ. That’s a comeback!

PRAYER: Dear Jesus, earthquakes shook this world when you died and when you rose. Shake up this world by your death and resurrection. As you came back from earthquake disasters, lead my comeback victory over my earthly disasters and difficulties. You are my Lord and Savior. Amen.

FURTHER MEDITATION: Easter impact: Read Romans chapter 6 this week Tuesday, Wednesday and Thursday. Start anywhere. Slow down. Absorb. Meditate. Ask God to help you understand the meaning of his words, explaining the difference the resurrection makes for you beginning now and never ending in eternity.