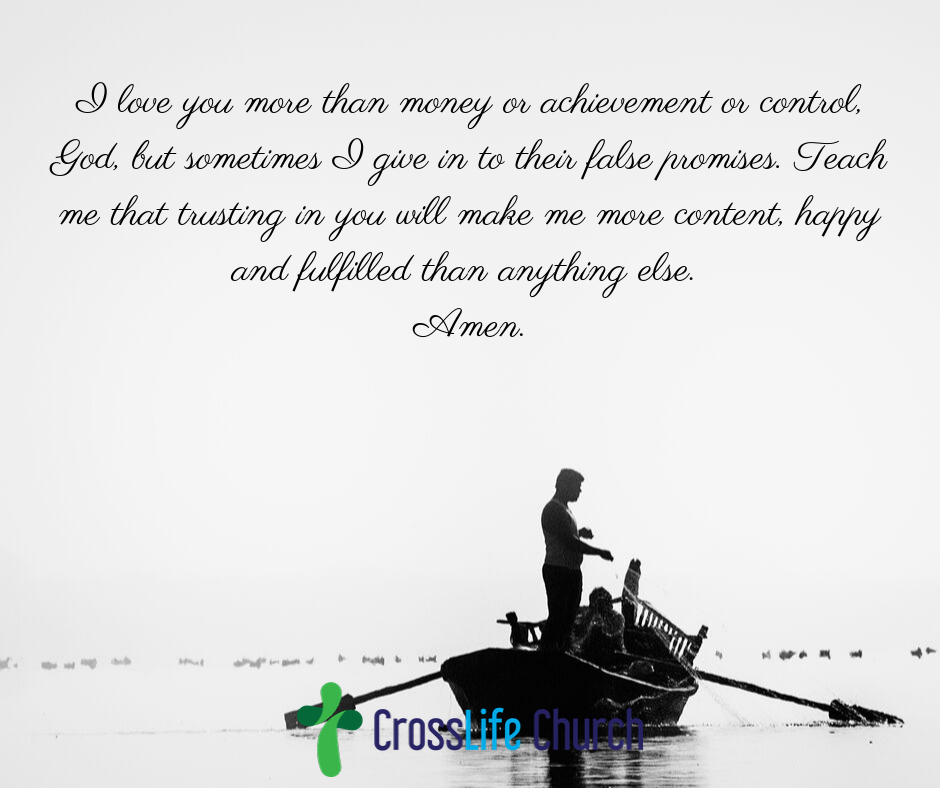 “Keep your lives free from the love of money and be content with what you have, because God has said, ‘Never will I leave you; never will I forsake you’” (Hebrews 13:5).

Contentment results in freedom. Real life that isn’t run or ruined by worry or money or anxious striving. Contentment starts with God. And often times circumstances don’t need to change in order to be content, but rather how we view those circumstances.

The American businessman was at the pier of a small, coastal Mexican village when a small boat with just one fisherman docked. Inside the small boat were several large yellowfin tuna. The American complimented the Mexican on the quality of his fish and asked how long it took to catch them. The Mexican replied only a little while.

The American then asked why didn’t he stay out longer and catch more fish? The Mexican said he had enough to support his family’s immediate needs.

The American then asked, but what do you do with the rest of your time? The Mexican fisherman said, “I sleep late; fish a little; play with my children; take a siesta with my wife, Maria; stroll into the village each evening where I sip wine and play guitar with my amigos; I have a full and busy life, señor.”

The American scoffed, “I am a Harvard MBA and could help you. You should spend more time fishing; and with the proceeds, buy a bigger boat; with the proceeds from the bigger boat, you could buy several boats; eventually you would have a fleet of fishing boats. Instead of selling your catch to a middleman, you would sell directly to the processor, eventually opening your own cannery. You would control the product, processing and distribution. You would need to leave this small coastal fishing village and move to Mexico City, then LA and eventually NYC where you will run your expanding enterprise.”

The Mexican fisherman asked, “But, señor, how long will this all take?”

To which the American replied, “Fifteen to twenty years.”

The American laughed and said that’s the best part. “When the time is right, you would announce an IPO and sell your company stock to the public and become very rich; you would make millions.”

“Millions, señor? Then what?”

The American said, “Then you would retire. Move to a small coastal fishing village where you would sleep late, fish a little, play with your kids, take a siesta with your wife, and stroll to the village in the evenings where you could sip wine and play your guitar with your amigos.”

PRAYER: I love you more than money or achievement or control, God, but sometimes I give in to their false promises. Teach me that trusting in you will make me more content, happy and fulfilled than anything else. Amen.

FURTHER MEDITATION: Say the Lord’s Prayer today, but after you meditate on how it trains God’s people in contentment. The address (“Our Father”) and the first three petitions, or requests, focus on God. Who he is. What he desires. How he works. “Your name … your kingdom … your will.” This is vitally important before asking “give us” in the fourth petition. We are not ready to ask for all we want until we believe that God is all we need.