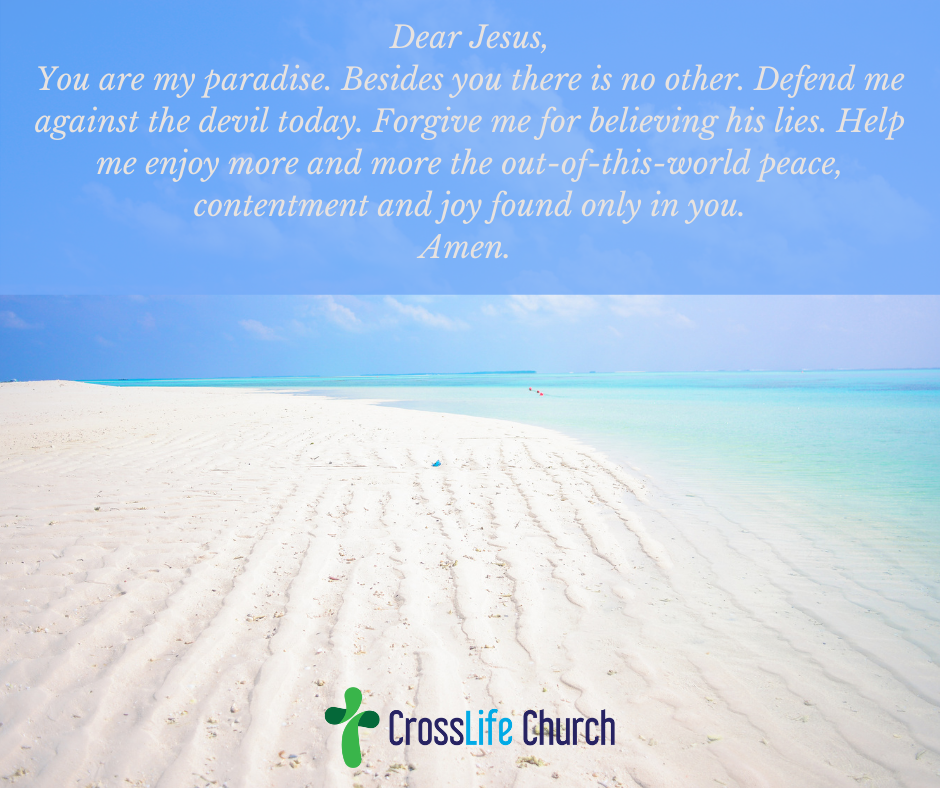 Now this is paradise.

The Bible tells us that after “the heavens and the earth were completed in their vast array … the Lord God … planted a garden in the east, in Eden, and there he put the man he had formed. And the Lord God made all kinds of trees grow out of the ground – trees that were pleasing to the eye and good for food … a river watering the garden flowed from Eden” (Genesis 2:1,8-10).

So it’s hard to believe that Adam and Eve didn’t consider the Garden of Eden paradise at all, but prison.

Instead of thanking the Lord God for creating a luxury home for them they cursed him for not making it better. With the help of the devil they longed for their dream paradise waiting just beyond their reach.

Just a taste is all they needed. Then they’d be happy. So Adam and Eve took the fruit that God had prohibited and the devil had promoted, eagerly anticipating the paradise that would be theirs.

What they chewed and then swallowed was not paradise at all, but poison. These are our parents indeed.

Whatever and wherever it is, let me assure you of this: the devil knows it.

In their sin, Adam and Eve wanted to be as far away from God as possible, to hide from him, blame him, and shut him out of their lives. In his mercy, the Lord God wanted to be closer to Adam and Eve than ever. He loved them and would not let them go, according to Genesis 3.

After Adam and Eve disobeyed the Lord God came to them and called out to them, “Where are you?” with anxious and seeking love.

That anxious love became an active love when the Lord God took matters into his own hands. There in the garden he turned on his heels to the devil himself, “I will put enmity between you and the woman, and between your offspring and hers; he will crush your head, and you will strike his heel.”

Beginning then, the devil would never be considered a friend by anyone who belongs to God.

And at a time to come in the future, one descendant of Eve would have his heel bitten by the devil’s bite but turn and crush the devil in conquering defeat.

Here, breathed by God’s promise in the garden, is Jesus Christ, the paradise of sinners. He will be born, live on this earth, be harassed by the devil’s fiery temptations and clamped by the serpent’s venomous fangs. But he deals the first crushing blow to Satan’s head by his perfect obedience.

And when Jesus makes his way to the tree of the cross, the Savior of the world deals the final blow to Satan’s head by his sacrificial death for our sins.

The devil, who overcame humanity by a tree, has now by a tree been overcome.

The devil offers only poison, as sweet as it may taste. Jesus Christ is our true paradise.

PRAYER: Dear Jesus, you are my paradise. Besides you there is no other. Defend me against the devil today. Forgive me for believing his lies. Help me enjoy more and more the out-of-this-world peace, contentment and joy found only in you. Amen.