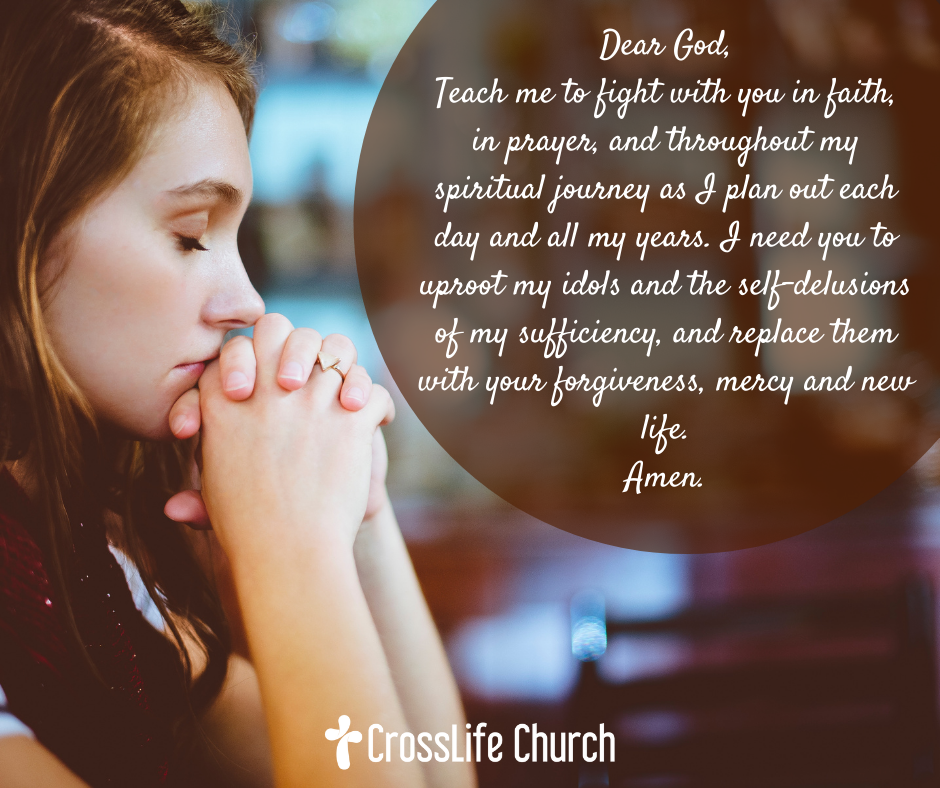 Jacob had struggled with his twin brother Esau, his father Isaac, his uncle Laban, his wives, his mistresses, and his servants. He was a schemer and manipulator whose name meant “heel grabber.”

Jacob was very good at tripping people up. Tricking them and catching them by surprise. Getting his way and getting away with it. Most of the time.

But not with God, who met him one strange night to confront his self-reliance. They wrestled. Actually wrestled, because God took on a human form and appeared as Jacob’s opponent.

“Jacob was left alone, and a man wrestled with him till daybreak. When the man saw that he could not overpower him, he touched the socket of Jacob’s hip so that his hip was wrenched as he wrestled with the man” (Genesis 32:34,25).

Now Jacob struggles with God in the darkness of night. They grapple so tightly, each panting, moving, counter-moving, we don’t know who is winning.

Why would a mere mortal appear to be countering God? And why would God appear to one of his children as an opponent?

Surely not to crush the life out of him. To end the match, God could have snapped Jacob’s neck and invoked a stadium of a million angels to cheer his praises.

Here’s why. Jacob’s empty life of seeking control, and looking for love and happiness in idols, must be uprooted. Only God can and will take them away. “This is gonna hurt.”

Jacob’s struggle changed from groping on tightly to his own trickery to grappling with God, seeking to hang onto the God who came to hang onto him. God was delighted that Jacob was now wrestling with him and not everything else.

God didn’t want Jacob (and he doesn’t want you) to be timid with him. To shrink into false humility or foolish hopelessness. God delights to let you wrestle him on the basis of humble, believing prayer. Jacob clung in faith to God and to God’s promises. “I am going to trust in you, God, and not let go.”

Some men yell more at a big screen TV in a sports bar during the game than at God, who can change their life. Some women spend more time demanding that their husbands keep their promises than demanding that God keep his promises, which bring them salvation. Some teens and young adults develop exceptional skills communicating on their phone, yet don’t communicate with that passion with God.

Empty life. Fighting for the wrong things. God needs to wrestle them in away. And in your prayers as he does so, he wants you to fight for the right things. He has them and will give them. Don’t let him go.

Jacob walked away from that wrestling match of prayer as a new man, and with a handicap. God wrenched his hip. He walked with a limp now. A lifelong reminder that trusting God and not letting God go—even when it hurts—is the kind of faith fight God is looking for.

And God promises never to let you go, either. Get ready. His grip is tight!

PRAYER: Dear God, teach me to fight with you in faith, in prayer, and throughout my spiritual journey as I plan out each day and all my years. I need you to uproot my idols and the self-delusions of my sufficiency, and replace them with your forgiveness, mercy and new life. Amen.

FURTHER MEDITATION: Today is the National Day of Prayer in America. What needs to be more of a “fight” in your prayer life? Where is God resisting so that you hold on to him more tightly as you pray? Pray those prayers today, wrestle with God, don’t let him go, and watch him win.