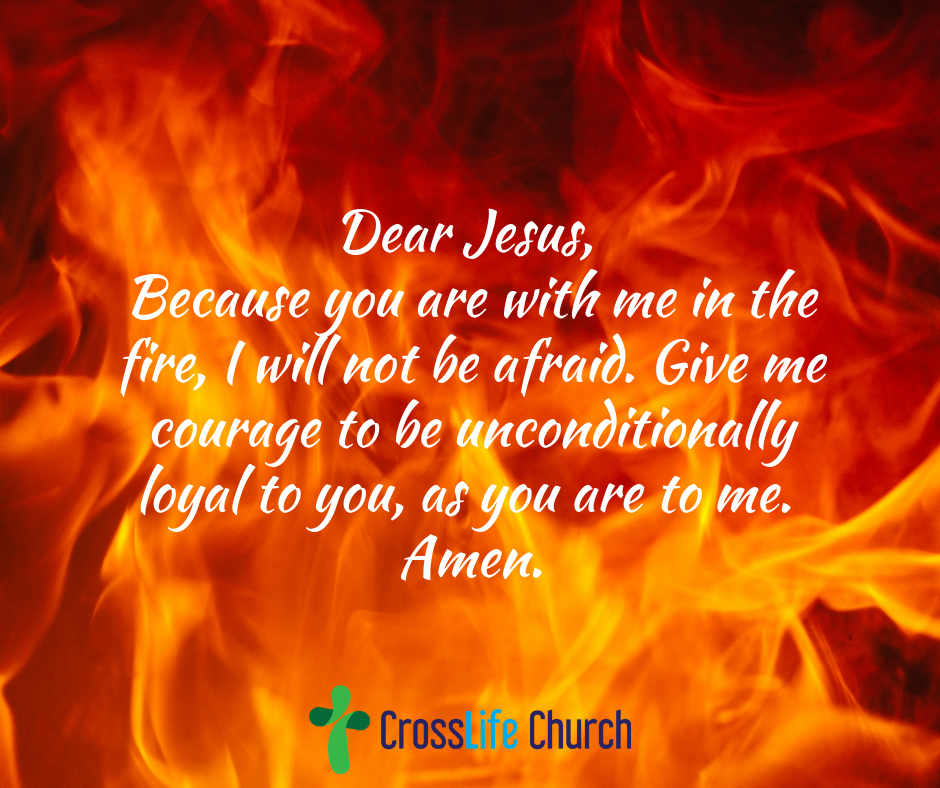 Shadrach, Meshach, and Abednego were three young, God-loving Israelites in the 6th century BC, living happily in their homeland until it was invaded by world power Babylon, who deported the professional classes like artists, professors, and military officers, especially the younger ones.

These three young men, living and working now in Babylon, wanted to be faithful to their Lord God yet obey the Babylonian laws. Most often they could do both, but not this time. King Nebuchadnezzar had decreed that an idol image of gold be erected in the most public place in the city. When the music played in that public place, those within sight of the image were commanded to bow down to it or be thrown in a blazing furnace.

So everyone bowed. Except for Shadrach, Meshach, and Abednego. The king found out, and brought them to the fiery furnace. They boldly announced, “If we are thrown into the blazing furnace, the God we serve is able to deliver us from it, and he will deliver us from Your Majesty’s hand. But even if he does not, we want you to know, Your Majesty, that we will not serve your gods or worship the image of gold you have set up” (Daniel 3:17,18).

Let’s paraphrase that: “Our God can save us and we think he will save us, but he may have other plans and we’re okay with that. We fear, love, and trust in God for himself, not for what we get out of him.”

The men were pushed into the flames, and Nebuchadnezzar couldn’t believe his eyes. There was a fourth man in the fire with them, and none of them were burned. Jesus, the Son of God, in the fire. Unconsumed. Unburned. Very much alive and his companions alive, too. This is the glory of God. A greatness and grace that doesn’t exist just for itself, but to save people.

No fires of hell will ever scorch your soul. No fires of God’s anger will ever touch your life. Not when Jesus is in the fire with you. You are forgiven. You are free. The ultimate firefighter Jesus has already put out the fires of God’s justice, and now he stands with you in the smaller fires of suffering for God’s glory. And you will not be burned.

God the Father sent his Son Jesus to Nebuchadnezzar’s fire as a preview of the victory over hell and sin and death. They cannot hurt you. Is that enough for you to say, “I will fear, love, and trust in God no matter what the consequences.”?

PRAYER: Dear Jesus, because you are with me in the fire, I will not be afraid. Give me courage to be unconditionally loyal to you, as you are to me. Amen.

FURTHER MEDITATION: “Even if you don’t, my hope is you alone.” Those lyrics and this story form a song by Mercy Me. Give it a listen, find comfort and courage in it. What fires in your life need you to trust God to be God, even if … ?  https://youtu.be/B6fA35Ved-Y