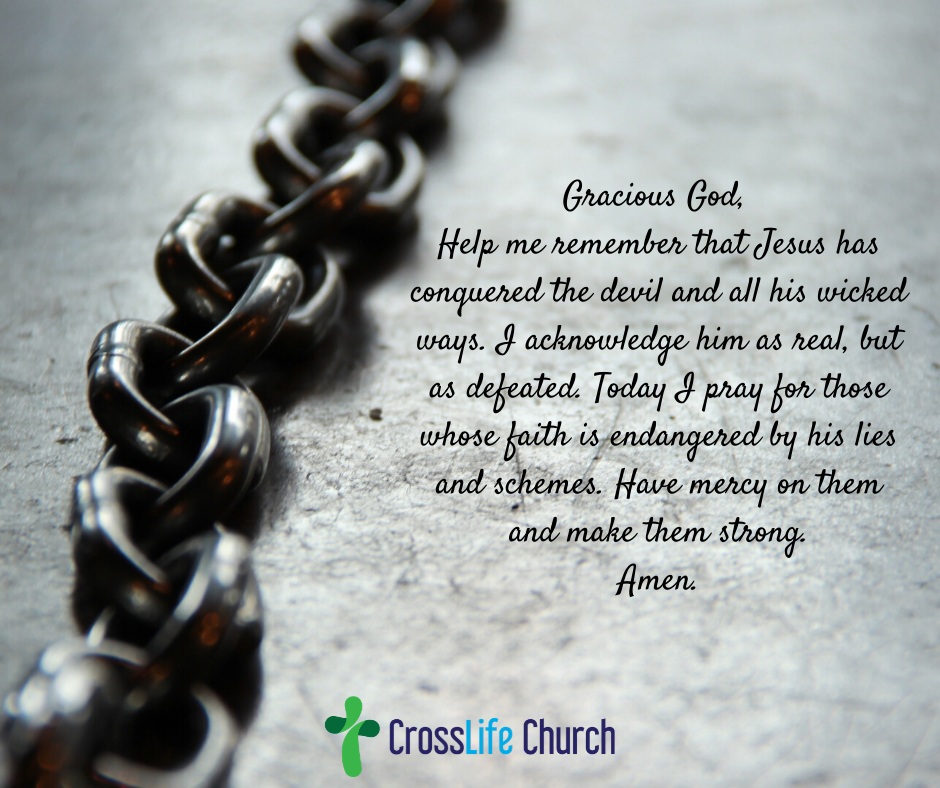 If God is almighty and loving, how can the devil operate in this world as his wicked enemy?

Because God uses the devil’s work to accomplish his own. The devil is not master but servant. He’s chained. A prisoner.

Yes, the devil tripped Jesus by acting through Judas and other misguided, wicked authority figures to have Jesus tortured and killed. But that very act of death was God’s plan for a sacrifice to suffer the curse and guilt of your sins in your place.

The devil tripped Jesus, but Jesus recovered, resurrected, and trapped the devil.

The book of Revelation pictures that work of Jesus Christ, “having the key to the Abyss and holding in his hand a great chain. He seized the dragon, that ancient serpent, who is the devil, or Satan, and bound him for a thousand years. He threw him into the Abyss, and locked and sealed it over him, to keep him from deceiving the nations anymore until the thousand years were ended. After that, he must be set free for a short time.” (Revelation 20:1-3).

The devil has been doubly defeated! He’s chained up and he’s locked down!

Jesus begins the book of Revelation with the assurance, “Do not be afraid … I hold the keys of death and Hades” (1:17,18).

Calm your fears not by dismissing the devil, but just the opposite—paying attention to him. Take inventory of his strength, respect his skill, and study his strategy. Acknowledge his danger and then answer it by trusting the superior saving work of your Savior Jesus Christ.

When the lies of the devil call to you through the temptations of your mind or the sinful pleasures of the flesh or the lies of the world, stand strong. Say no to the devil because he cannot harm you when your King is Jesus Christ.

He’s chained and imprisoned by the death and resurrection of Jesus Christ and his powerful Word which is in your heart! Like a vicious dog on a chain or a deadly criminal in a cage, the devil barks and boasts, he snarls and threatens, but cannot advance beyond the boundaries set by Christ.

He’s judged. The deed is done.

Look the devil in his deep, dark eyes and tell him, “You don’t own me. You won’t tell me what to do any more. You can’t hurt me—in my thoughts, in my soul, or in my body—because I belong to my Savior Jesus Christ!”

PRAYER: Gracious God, help me remember that Jesus has conquered the devil and all his wicked ways. I acknowledge him as real, but as defeated. Today I pray for those whose faith is endangered by his lies and schemes. Have mercy on them and make them strong. Amen.