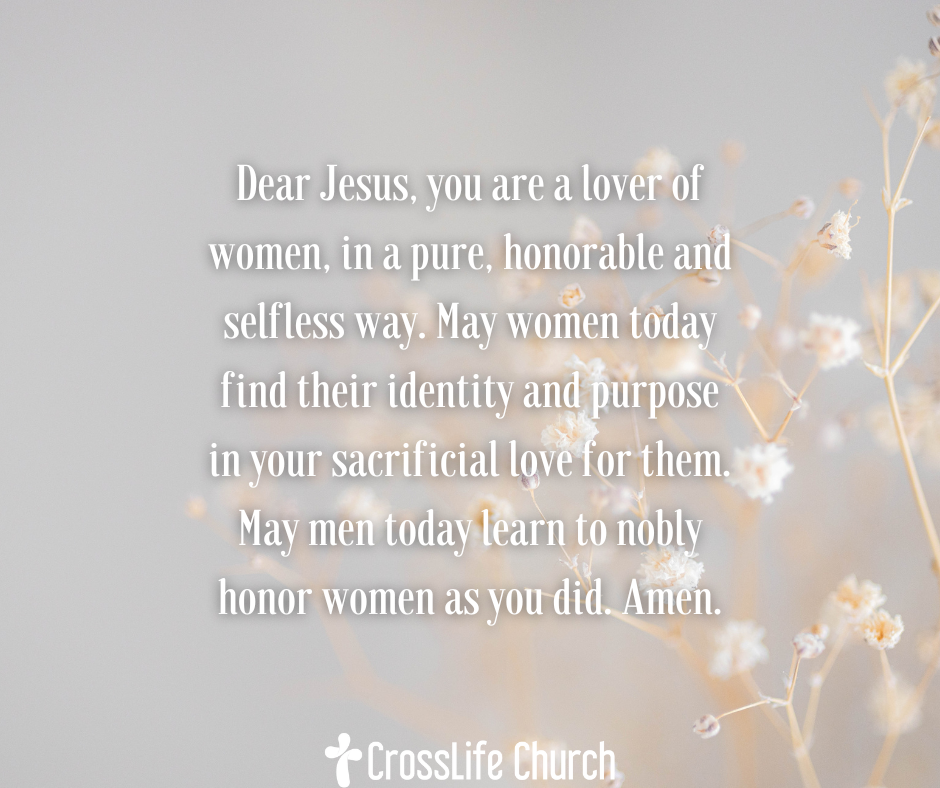 Jesus loved women. No, he was not a womanizer. Womanizers don’t love women as much as they love themselves.

Jesus loved women in a pure, deep, selfless, and inspiring kind of way. He also got in trouble for it.

A rabbi at that time was not supposed to speak to a woman in public (not even his own wife).

Jesus engaged in conversation with a Samaritan woman at the well, expressed his full knowledge of her sinful life, and promised her his grace and forgiveness. It changed her life. When his disciples returned and saw Jesus with her, they “were surprised to find him talking with a woman” (John 4:27).

Even today, an orthodox Jewish man is forbidden to touch, or to be touched by, any woman who is not his wife or close family relation.

Jesus touched, and healed, Peter’s mother-in-law and took by the hand Jairus’ dead daughter, raising her back to life.

A sick woman reached through the crowd to touch Jesus and was healed. When Jesus asked “Who touched me?” the Bible says that she “came trembling and fell at his feet … she told why she had touched him and how she had been instantly healed. Then he said to her, “Daughter, your faith has healed you. Go in peace” (Luke 8:45,47,48).

Once when Jesus was teaching, Jesus saw in the crowd a woman who was crippled because of a demon that harassed her. He called her forward, then “put his hands on her, and immediately she straightened up and praised God.” The religious rulers criticized him, and Jesus replied, “should not this woman, a daughter of Abraham, whom Satan has kept bound for eighteen long years, be set free on the Sabbath day from what bound her” (Luke 13:13,16)?

See how Jesus defends, upholds and promotes the value of women? Not just by his actions, by his touching, by his attention, by his noticing but also in the presence of those who want to devalue them. “See this woman?” Jesus says. “She is a daughter of Abraham.”

Jesus allows a prostitute to wipe his feet with her hair and some expensive perfume. Jesus commends a poor widow for giving a penny to church—because it’s all she had to live on. Jesus rescues a woman who, according to religious rules, deserved to be stoned to death.

Jesus benefitted from the kindness and help of some women who followed him like his disciples (Luke 8:1-3). Jesus treasured his friendship with Mary and Martha.

The first person to see Jesus alive after he rose from the dead was a woman, Mary Magdalene. And Jesus submitted to the parenting authority and love of a special woman, his mother.

May we, the church, the body of Christ, follow his example today. And particularly, may we bless women with his love.

PRAYER: Dear Jesus, you are a lover of women, in a pure, honorable and selfless way. May women today find their identity and purpose in your sacrificial love for them. May men today learn to nobly honor women as you did. Amen.

FURTHER MEDITATION: Read Luke 7:36-50. What does that true story teach you …

A.  … if you are a woman, about your identity and purpose in Christ?

B.  … if you are a man, about how to treat women like Christ?