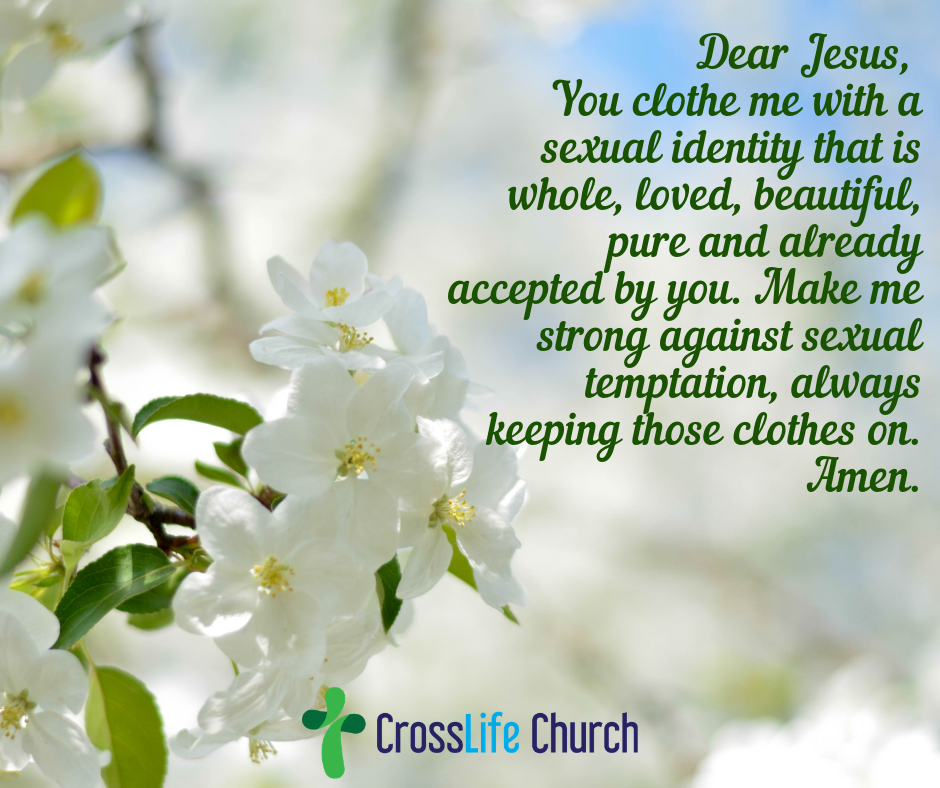 Joseph kept his clothes on. It’s that simple. Here’s the true story from Genesis 39.

His brothers hated him and sold him as a slave, and eventually he ended up serving a man in Egypt named Potiphar. Well, Potiphar noticed Joseph’s exceptional abilities, and he promoted him, and promoted him again, until Joseph was the head of the household.

But someone else noticed Joseph, too (he was about 18 years old at the time).

“Now Joseph was well-built and handsome, and after a while his master’s wife took notice of Joseph and said, ‘Come to bed with me’” (Genesis 39:6,7).

Joseph said no. “My master has withheld nothing from me except you, because you are his wife. How then could I do such a wicked thing and sin against God” (Genesis 39:9)? She grabbed his outer cloak and he ran.

Frustrated by his lack of promiscuity, she framed Joseph. She urgently called Potiphar and claimed that Joseph came in to make advances on her, that she screamed, that he ran and left his cloak. So Potiphar tossed Joseph in prison.

But Joseph kept his clothes on. Not just his regular clothes (the ones he still had on under his cloak). These clothes: he maintained his true identity and purpose, dressed in the righteousness of God.

Joseph had in the past been given a coat of many colors, then his brothers stripped him and sold him into slavery, then he was given this decorated cloak as head of household for Potiphar, then that was taken and replaced with prison clothes.

But none of these defined Joseph’s true identity and purpose. That came from the clothes mentioned in this verse: “I delight greatly in the Lord; my soul rejoices in my God. For he has clothed me with garments of salvation and arrayed me in a robe of his righteousness” (Isaiah 61:10).

That robe of righteousness was woven by Jesus, who cloaked himself in human nature, was stripped of his clothes and beaten before he was crucified, at which point the soldier’s divided up his clothes between them. Another Joseph (of Arimathea) wrapped his dead body in cloths and put him in a tomb. Three days later Peter and John saw those burial clothes folded nicely in the tomb but Jesus had risen from the dead. All of it wove together the robe of righteousness that belongs to all believers.

There was a different item of clothing that Joseph never took off, and that is what kept him sexually pure, and you, too. His robe of righteousness. The grace and mercy of a forgiving God who made Joseph strong against temptation.

Your identity in Christ is not broken or hurt, it is not lonely or misunderstood, it is not unfulfilled or weak.

Clothed with Christ you are whole and complete.

Clothed with Christ you are loved and known.

Keep those clothes on for sexual purity.

PRAYER: Dear Jesus, you clothe me with a sexual identity that is whole, loved, beautiful, pure and already accepted by you. Make me strong against sexual temptation, always keeping those clothes on. Amen.

FURTHER MEDITATION:Read Joseph’s story in Genesis 39. Then go back and give special attention and meditation to vv. 3-4, and vv. 20-23. What is the reason Joseph was so successful? Could this also apply to you, or is it limited only to Joseph?