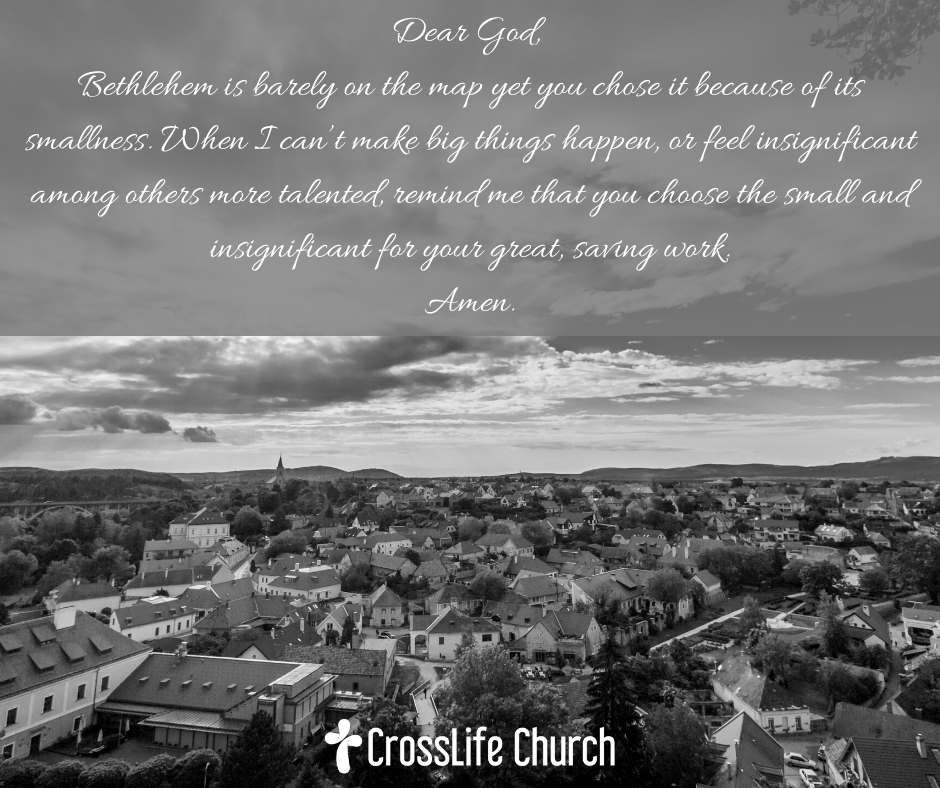 Jesus was born in a sleepy small town called Bethlehem.

Bethlehem is so small that it doesn’t appear on Google Maps unless you zoom in 3 times.

Bethlehem is so small it wasn’t even on the map as one of the hundred cities allotted to Judah when the Israelites took possession of the promised land.

Bethlehem is so small that, well, smallness is its fame in Christmas carols like, “O Little Town of Bethlehem.”

The subtitle “Ephratha,” a Hebrew word that means “fruitful,” no doubt referring to the fertile olive tree groves in the area, had to be attached so that people would know what town it even was.

The word Bethlehem means “the house of bread” and is located six miles south of Jerusalem in the hill country of Judea. In the Old Testament, Bethlehem was home to Ruth and her husband Boaz, the great grandparents of King David. David grew up in Bethlehem, tending his father’s sheep, and there he was also anointed king over Israel by the prophet Samuel. Therefore, Bethlehem became known as the “city of David.”

So despite its small size and insignificance compared to more prominent cities, in the history of salvation by the saving acts of God, Bethlehem is big and influential.

That’s a big reason God chose Bethlehem as the birthplace of his Son, Jesus. God loves using the small, the insignificant, even the impossible to accomplish his great, saving work.

Ruth, twice lonely as both a widow and an immigrant, became an ancestress of Jesus.

For the same reason, news came 700 years before Jesus was born from an unknown prophet named Micah, “But you, Bethlehem Ephrathah, though you are small among the clans of Judah, out of you will come for me one who will be ruler over Israel, whose origins are from of old, from ancient times” (Micah 5:2).

PRAYER: Dear God, Bethlehem is barely on the map yet you chose it because of its smallness. When I can’t make big things happen, or feel insignificant among others more talented, remind me that you choose the small and insignificant for your great, saving work. Amen.