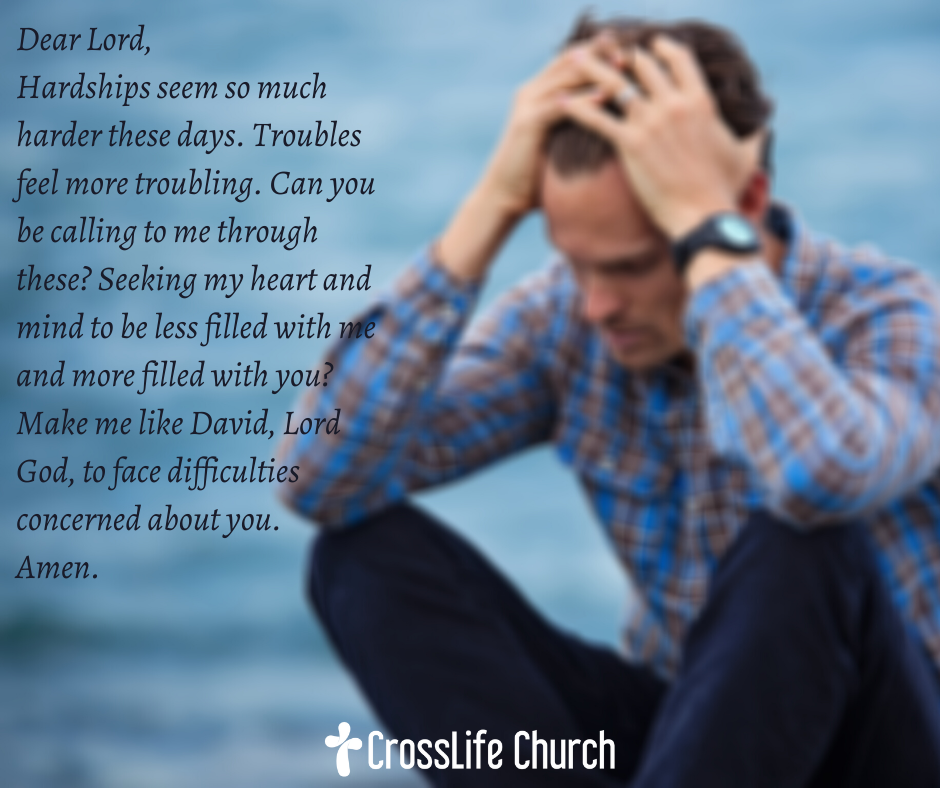 Perhaps more difficult than facing Goliath or conquering fierce enemies on the battlefield, David could not flee from David.

Do you ever feel that way?

You can be your own worst enemy. Understanding this, however, helps you in many ways.

You won’t blame others for your problems. You won’t walk around with a beam in our eye, picking the specks out of others’ eyes. You are less hypocritical and more compassionate. You repent and appreciate forgiveness.

The apostle Paul considered himself the worst sinner, yet also the most victorious, resurrected, blessed and confident saint of God who gave credit to the Lord Jesus Christ for his faith-filled attitude and mission achievements (1 Timothy 1:12-17). Paul understood his battle with himself, but also the victory that Jesus Christ won for him, which belonged to him by faith (Romans 7 and 8).

This same faith and confidence protected David from personalizing the mudslinging curses of Shimei, even if they were slanderous half-lies and half-truths. Here’s what happened: King David was dealing with the conspiracy and betrayal of his own son, Absalom, who was seeking the throne.

Desperate and humiliated, David was exiting the city to avoid a violent confrontation between his army and the riotous mob following Absalom. In this difficult moment, a heckler named Shimei stepped out of the crowd and began throwing stones at David and his bodyguards. He cursed David, calling him a murderer and scoundrel who deserved to be mistreated by his own son.

This was an easy one for David’s secret service agents. They knew the drill. They put Shimei in their sights and asked David to say the word. They’d take him out.

The other giant David faced was himself

In this moment of humiliation, when it would have been politically and personally a great idea for David to rise up and show his strength, he won the battle with himself. He made it more about the Lord than about himself or Shimei. He told his men that perhaps these are things that the Lord God wants David to consider.

“Leave him alone; let him curse, for the Lord has told him to” (2 Samuel 16:11). David could see the Lord’s hand even in this injustice.

What difficulties do you face today? How many of them are your own doing? The things we suffer aren’t usually as bad as the way we choose to suffer them.

If you are more concerned about your Lord God than about yourself, you will still experience troubles but you won’t be defeated by yourself or your sufferings. Pain and criticism won’t unravel your mind and soul. Attacks and injustice will be much smaller enemies.

What challenges do you bring to the day because you are who you are? There is One who is greater. One who was here before you and thought of you before the earth came to be. One whose actions and decisions are righteous and saving enough to cover yours. One who loves you and is never your enemy.

Trust your Lord Jesus. Show others you trust him. Be humble before him. Live in repentance. And the greatest evils, injustices and internal struggles will not be in charge in your life. Not today. Not tomorrow. Not ever.

Dear Lord, hardships seem so much harder these days. Troubles feel more troubling. Can you be calling to me through these? Seeking my heart and mind to be less filled with me and more filled with you? Make me like David, Lord God, to face difficulties concerned about you. Amen.

Read the story in 2 Samuel 16:5-14. Meditate on what it means for you this week. How you handle criticism. What you think about those whose opinions differ from yours. Whether God is trying to get your attention through injustice or hardship. Pray for his mercy, truth, and wisdom.