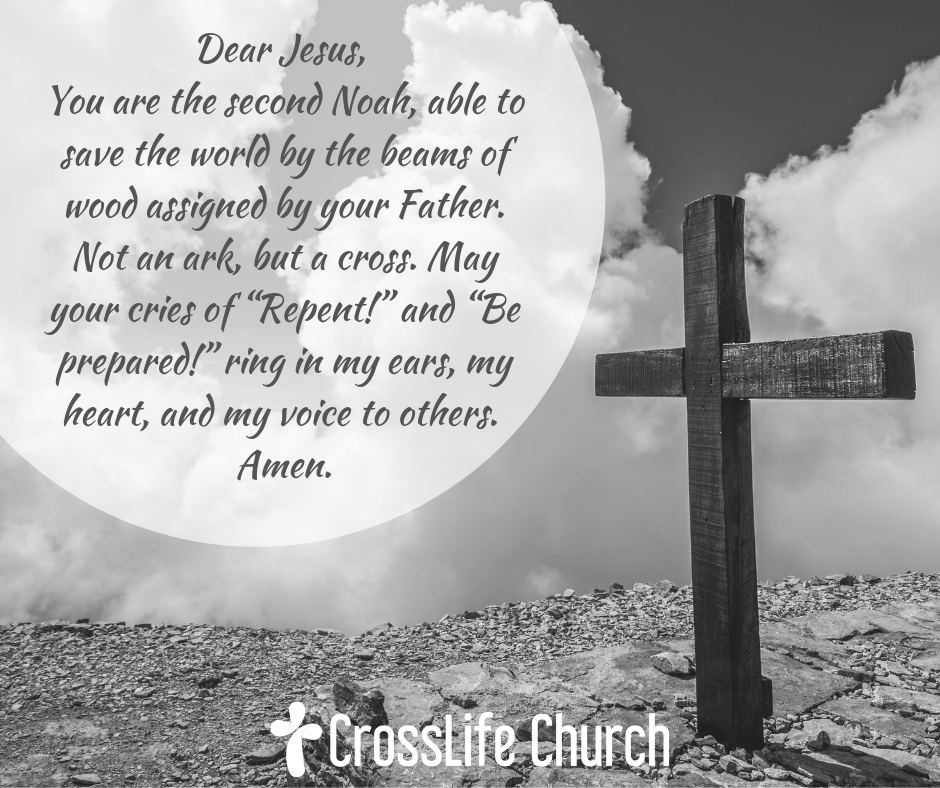 Noah is described as a righteous man. God chose him among the people of his day to build the ark—a huge enclosed barge that would provide deliverance from a worldwide flood.

Noah was upright. He believed God’s commands and promises. He wanted other people to believe them also.

Noah’s cries became more desperate. Then the floodwaters deluged the entire planet. They rose quickly, as floodwaters tend to do. The cavalier attitude of the mockers and skeptics who laughed at Noah now cried in regret. But the ark had been shut tight with all the animals and Noah’s family of eight, or they too would have perished. Noah’s heart grieved.

Centuries later, Jesus would walk this same earth. The people who repopulated it were mockers and skeptics again, who laughed at Jesus’ claims to be the Son of God and the Savior who forgives. They killed him.

Jesus was a righteous man. God the Father chose his Son.

Like Noah, Jesus was lifted up by beams of wood, “the righteous for the unrighteous (1 Peter 3:18).

Except he wasn’t spared. He was sacrificed into the angry waters of God’s justice for sin. He died.

Within three days, however, Jesus came back to life. Then he preached to the same people who rejected Noah. They had died in the flood but their imprisoned spirits in hell were alert, awake, and full of regret. After coming back to life, Jesus descended into hell. With a message. His heart grieved.

The wooden beams holding up the righteous man save the unrighteous ones. Ignore this and you’ll regret it. The second Noah saves.

PRAYER: Dear Jesus, you are the second Noah, able to save the world by the beams of wood assigned by your Father. Not an ark, but a cross. May your cries of “Repent!” and “Be prepared!” ring in my ears, my heart, and my voice to others. Amen.

FURTHER MEDITATION: Read 1 Peter 3:18-22. Make time for this, at least 15-20 minutes. Put away your devices. Turn off your screens. Slow down. Now, pray for God’s enlightenment as you meditate on these words and their meaning. Reflect and pray about the following explanations, as you re-read this section piece by piece.