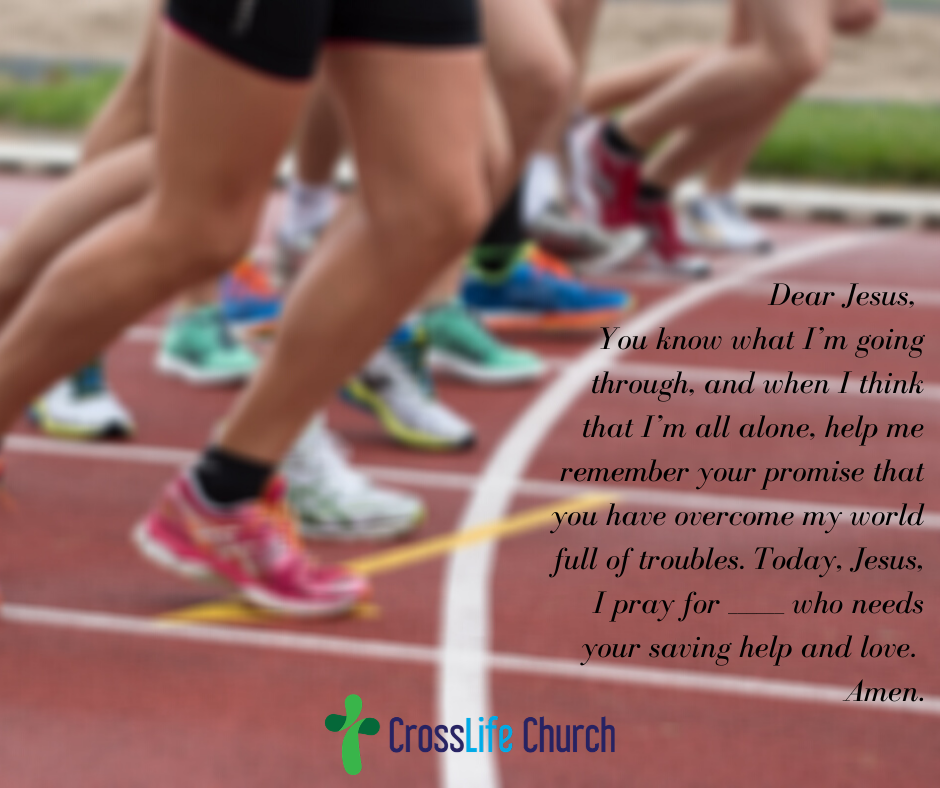 Derek Redmond was a young British runner who had sky-rocketed to fame by shattering his country’s 400-meter record at age 19. But then an injury forced him to withdraw from the 1988 Olympics, and he endured five separate surgeries. He then trained even harder.

When the Summer Olympics arrived in Barcelona in 1992, Derek was hungry for a medal. On the day of the 400-meter race, thousands of fans streamed into the stadium. High in the stands sat Derek’s father, Jim, a faithful witness to every one of his son’s world competitions.

The race begins. Derek breaks through the pack to seize the lead. “Keep it up, keep it up,” his father says to himself. Heading down the backstretch Derek looks sure to win, and qualify for the finals.

But then he hears a pop. It’s his right hamstring. He pulls up lame, looking as if he has been shot. His leg quivering, Derek begins to hop on the other leg, and then he falls helplessly to the track. Medical personnel run toward him as he sprawls on the ground, holding his right hamstring.

At the very same moment, there is a stir at the top of the stands. Jim Redmond, seeing his son in trouble, begins to race down from the top row. He is pushing toward the track, sidestepping some people and bumping into others. He has no right or credentials or permission to be on the track, but all he can think about is getting to his son, to help him up.

On the track, Derek realizes that his dream of an Olympic medal is gone. He is alone. The other runners streak across the finish line. Tears pour down Derek’s face. When the medical crew arrives with a stretcher, Derek tells them, “No, there’s no way I’m getting on that stretcher. I’m going to finish my race.”

And so he lifts himself to his feet, ever so slowly and carefully, and he starts hobbling down the track on one leg. One painful step at a time, each one a little slower and more agonizing than the one before, Derek limps onward, and the crowd begins to cheer for him. The fans rise to their feet and their cries grow louder and louder, building into a thundering roar.

Jim Redmond reaches the bottom of the stands, vaults over the railing, dodges a security guard, and runs out to his son—with two security people running after him. “That’s my son out there,” he yells back at his pursuers, “and I’m going to help him.” Jim reaches his son about 120 meters from the finish line, and wraps his arm around his waist.

“I’m here, son,” Jim says gently, hugging his boy. “We’ll finish together.” Derek puts his arms around his father’s shoulders and sobs. Together, arm in arm, father and son struggle toward the finish line with 65,000 people cheering, clapping and crying. Just a few steps from the end, with the crowd in an absolute frenzy, Jim releases the grip he has on his son so that Derek can cross the finish line by himself.

“I’m the proudest father alive,” Jim Redmond tells the press afterward, with tears in his eyes. “I’m prouder of him than I would have been if he had won the gold medal. It took a lot of guts for him to do what he did.” Together, they kept a promise they had made to finish the race, no matter what.

Christians make a promise to trust and love and follow Jesus. To fight the good fight and finish the race. Better yet Jesus has made a promise to anyone who believes in him.

“In this world you will have trouble,” Jesus promises, yet he trumps that with a better promise, “But take heart! I have overcome the world” (John 16:33)!

Whether you are running full stride or limping along, Jesus is at your side making you strong enough to compete, and eventually to win the final victory of eternal life. In his grace, he’s proud of you. So don’t give up.

Dear Jesus, you know what I’m going through, and when I think that I’m all alone, help me remember your promise that you have overcome my world full of troubles. Today, Jesus, I pray for ______ who needs your saving help and love. Amen.

Slow down, and use the PRAY acronym.