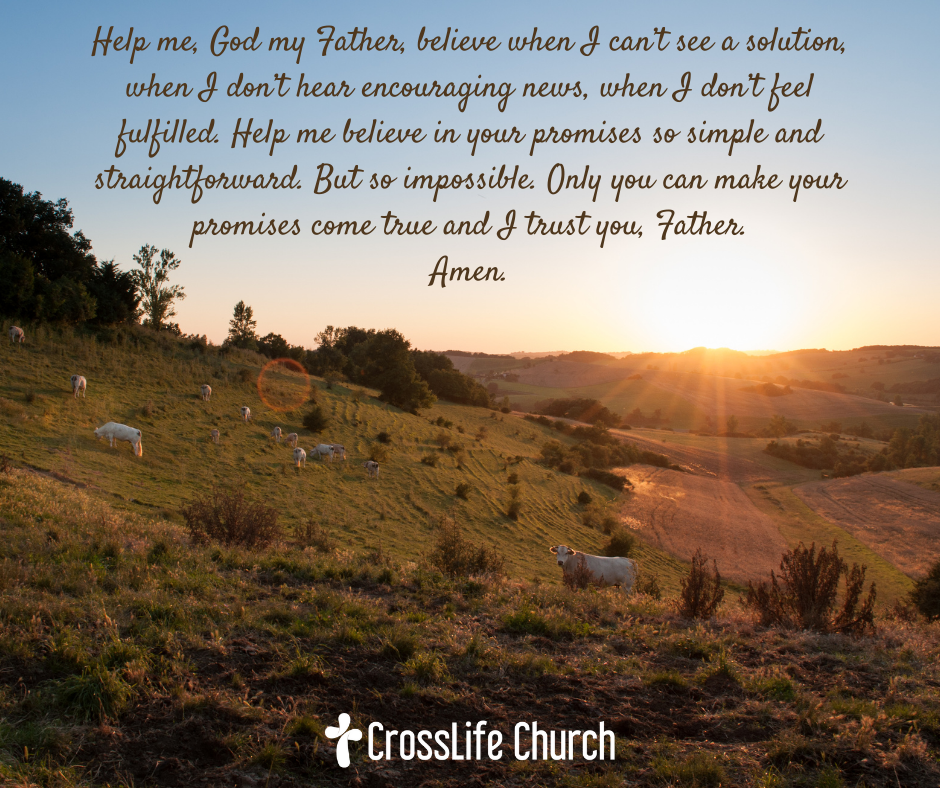 When he was 75 years old, Abraham was called by God to travel to the land of Canaan and dispossess its people from the land God promised would belong to Abraham and his descendants.

Over the next 24 years Abraham and his household would encounter hostile enemies and family squabbling, they would go hungry from famines, more than a once they would pull up stakes and move the entire homestead, they would be threatened and imprisoned by kings, and through it all Abraham’s hopelessness would find its most intense despair in one, constant source of pain: he and his wife, Sarah, could have no children.

Abraham and Sarah were as good as dead, they figured, because their family line would soon disappear.

He came to realize that his hope was found not in himself but in God, “who gives life to the dead and calls things that are not as though they were” (Romans 4:17). New life would come through God’s miraculous promise, “I will make you into a great nation, and I will bless you” (Genesis 12:2).

The Bible describes Abraham’s firm faith in this promise in Romans 4:18-21. “Against all hope” and yet “fully persuaded.” That’s faith. “Faced the fact that his body was as good as dead” yet “believed he would become the father of many nations.” That’s faith.

The key words here are still to come, however, because Abraham’s faith didn’t make his faith great. Abraham’s positive thinking or always looking on the bright side or spirit of optimism didn’t make his faith great. It was this: “just as it had been said to him,” – and this: “the promise of God” – and this: “God had power to do what he had promised.”

Abraham turned away from personal performance (which, at one point or another, will only lead to despair) and turned to the promise God had given him. Abraham believed God that he’d be the father of many nations. “Therefore, the promise comes by faith, so that it may be by grace and may be guaranteed” (Romans 4:16).

There are no guarantees in this life except for one: God’s grace. Abraham believed that.

Abraham believed that God makes promises because God is good, not because people are good. That’s grace.

Abraham believed that God keeps his promises because God always does what he says, not because people try to do what God says. That’s grace.

After God had blessed Abraham with descendants as numerous as the stars, it was in the womb of those descendants where God fulfilled his greater promise to Abraham, “All people on earth will be blessed through you” (Genesis 12:3). Through Abraham’s line of Jewish descendants God blessed the world with a Savior.

Jesus became the ultimate miracle son of Abraham, a son whom Abraham truly believed would some day save the world.

And he has. That’s grace.

PRAYER: Help me, God my Father, believe when I can’t see a solution, when I don’t hear encouraging news, when I don’t feel fulfilled. Help me believe in your promises so simple and straightforward. But so impossible. Only you can make your promises come true and I trust you, Father. Amen.

FURTHER MEDITATION: Read Romans 4:18-21. What are you struggling to believe these days? Pray for the faith of Abraham, and believe in God’s promises.