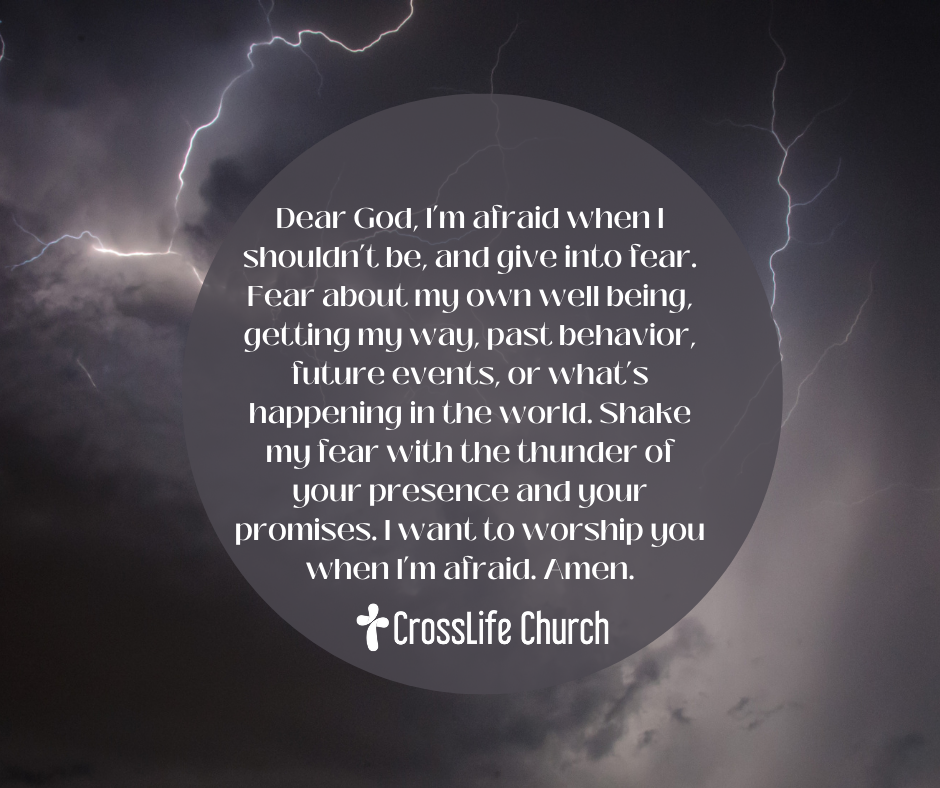 Do you know how fear works? God actually designed humans with fear instincts for our protection.

When you’re sitting in the stands at your son’s baseball game, and a foul ball comes screaming off the bat toward your face, your reflexes kick in. You duck or shield your head with your hands. That’s good fear.

But you’re not meant to remain in a state of fear. That’s bad fear.

Saul, the first king of the Israelites in the Old Testament, was afraid. And he remained that way. Even though he was exceptionally gifted, a military warrior, and he loved God—he gave way to fear.

The Philistines were attacking and Saul, as commander-in-chief, stood his ground with the Israelite army. But many of them fled. Saul decided to offer a sacrifice to God, but this was against clear orders that only the prophet Samuel could offer sacrifices.

Saul’s sacrifice was prompted by fear. A desperate attempt to get his way. To get out of trouble. “‘You have done a foolish thing,’ Samuel said. ‘You have not kept the command the Lord your God gave you’” (1 Samuel 13:13).

What is a sacrifice? It’s an act of worship telling God that you love and trust him so much that you take the life of an animal, as a sacrifice (this was the Old Testament sacrificial system). Or today you might give up something like your time, your money, your comfort or convenience. Give up sin. Because God is more important, God is first.

But Saul didn’t believe that, or he would have waited, trusting God’s word through Samuel. Who, by the way, faced the Philistines himself previously. They were attacking and the prophet Samuel was there.

“Then Samuel took a suckling lamb and sacrificed it as a whole burnt offering to the Lord. He cried out to the Lord on Israel’s behalf, and the Lord answered him. While Samuel was sacrificing the burnt offering, the Philistines drew near to engage Israel in battle. But that day the Lord thundered with loud thunder against the Philistines and threw them into such a panic that they were routed before the Israelites” (1 Samuel 7:9,10).

Look what happens there. Samuel calls on the Lord God as his strength, his might, his defense, his protection, and the Lord God responds with thunder.

When you’re afraid, worship God. Call on him. Trust in him more than you trust in your own ideas or abilities. And listen for his thunder, not against you but against your spiritual enemies. Against fear. Against shame. Against despair.

Worship God, and these will be defeated as often as they attack. Worship God, and his thunder will roar, proclaiming to the entire universe and the angels in heaven that he loves you and will take care of you.

PRAYER: Dear God, I’m afraid when I shouldn’t be, and give into fear. Fear about my own well being, getting my way, past behavior, future events, or what’s happening in the world. Shake my fear with the thunder of your presence and your promises. I want to worship you when I’m afraid. Amen.

FURTHER MEDITATION: Read 1 Samuel 7:7-17 and watch Samuel respond with worship in a time of fear. How does God respond?