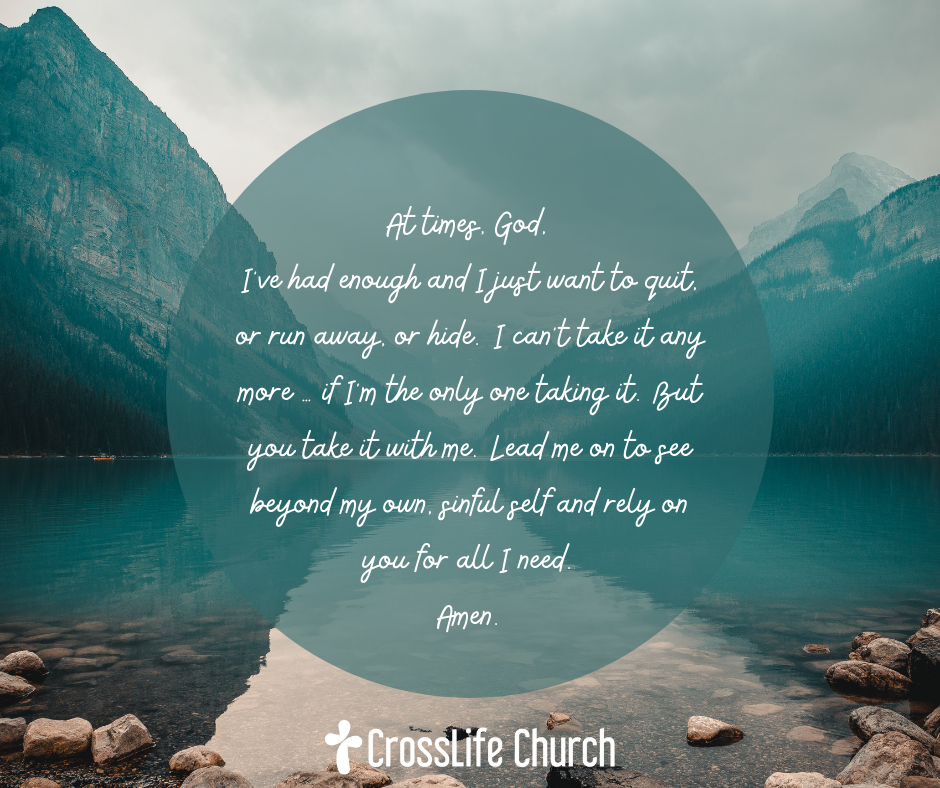 Elijah’s emotional, spiritual, and physical condition is at its peak. By the power of the Lord he had just outrun the mighty horses of King Ahab’s chariot and returned from Mt. Carmel 30 miles away. At Mt. Carmel the Lord had answered his prayer and consumed his saturated sacrifice with fire from heaven.

The prophets of Baal watched and waited for Baal to answer their pleas for help. He didn’t. And then they were put to death by the sword.

Prophet Elijah was ready for a religious renewal in all of Israel! The fire from heaven would surely convince wicked King Ahab to repent and turn to the Lord, and all Israel with him.

The result of the Mt. Carmel incident, however, wasn’t a religious renewal for Israel, but a death threat for Elijah from evil queen Jezebel, who was not too happy her prophets were dead. “May the gods deal with me, be it ever so severely, if by this time tomorrow I do not make your life like that of one of them” (1 Kings 19:2).

With the fear of death gripping his soul, Elijah turned and ran, and ran, and ran for 80 miles as far away as he could run from Jezebel to the city of Beersheba. As his strides became less frantic, and his legs became weary, and he started wondering why this had happened he could only be disappointed and discouraged.

How could the fire from heaven and the defeated prophets of Baal turn out to be such a failure?

Why would God to this?

The mighty man of God who had opened the heavens to pour out rain and spit out fire, who had raised the dead and been miraculously fed by ravens was running scared, angry at God for an apparent worthless performance on Mt. Carmel.

Physically worn out to the point of exhaustion, he was really holding no hope for his future usefulness in the kingdom of God.

He collapsed and complained, “I have had enough, Lord, take my life; I am no better than my ancestors” (1 Kings 19:4). Elijah likened himself to previous prophets like Moses and Samuel, claiming that they also were failures because the people of Israel continued in their sins of idolatry and wicked living.

An angel of the Lord appeared, baked some fresh bread for the exhausted prophet, and encouraged him. The angel told Elijah he still had work to do. It wasn’t over yet.

“Strengthened by that food, he traveled forty days and forty nights until he reached Horeb, the mountain of God” (1 Kings 19:8).

With renewed strength given him by God, Elijah journeys to the mountain where Moses once stood face to face with God and spoke with him. For forty days and nights he travels in the wilderness as Jesus did at the beginning of his ministry.

PRAYER: At times, God, I’ve had enough and I just want to quit, or run away, or hide. I can’t take it any more … if I’m the only one taking it. But you take it with me. Lead me on to see beyond my own, sinful self and rely on you for all I need. Amen.

FURTHER MEDITATION: Moses, Elijah and Jesus all experienced similar journeys. Where and when did the 3 of them meet to talk about it? Read Matthew 17:1-5.